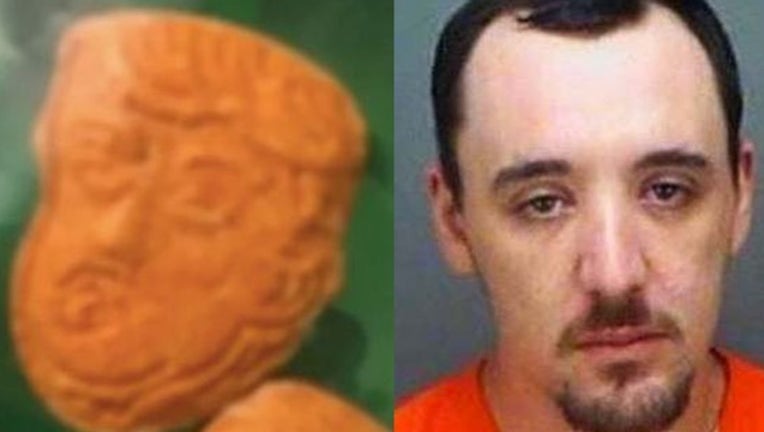 CLEARWATER, Fla. (FOX 35 ORLANDO) - A Florida man is facing charges after police said he was caught with ecstasy pills that were shaped like President Donald Trump's head.

Clearwater Police were called to the home of 23-year-old Brendan Timothy Dolan-King on Friday after reports of a drug overdose. After searching his home, police said they found illegal drugs, including MDMA pills that looked like the president hidden inside an air vent.

The ecstasy pills had six stars and ‘Trump NL’ stamped on the back.

According to The Smoking Gun, Dolan-King was charged on Friday. Lab tests reportedly confirmed that "a tan powder seized was fentanyl and that the Trump pills contained MDMA."

This isn't the first time some president-shaped ecstasy pills have been found.

Last year, Indiana State Police reported that they had found orange ecstasy pills (pictured above) shaped like Trump's head during a 6-day operation.

The Smoking Gun reports that Dolan-King was serving an 18-month felony probation sentence when he was arrested. He was busted last year for possessing several drugs, including MSMA pills shaped like, not Trump, but Darth Vader from 'Star Wars.'

RELATED: Florida deputies search for a man who swung a sword at a jogger during an argument over trash