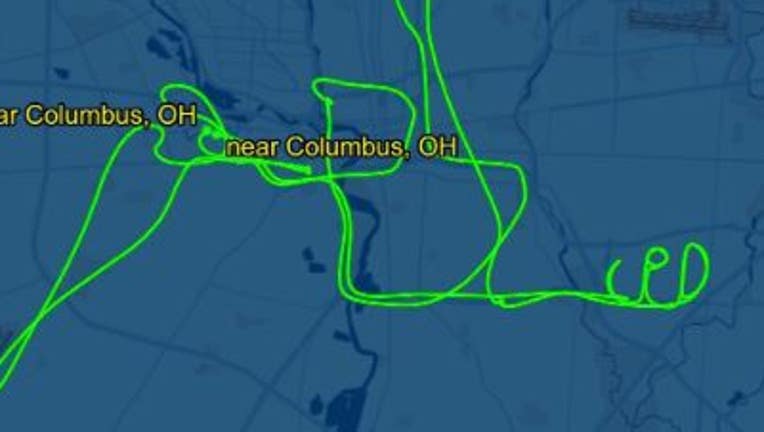 COLUMBUS, Ohio - The Columbus, Ohio, police department is investigating after complaints about its helicopter pilot's use of flight time. A tracking website shows that the pilot spelled out "CPD" during a recent midnight flight over the city.

"We were told over and over again how essential every second of airtime was," said Columbus City Council Member Rob Dorans. "This joyride was just plain dumb and a waste of taxpayer dollars."

In a statement, Columbus Police said that "leadership became aware of negative online comments about a helicopter patrol flight conducted early this morning. Commander Robert Sagle, who oversees the Aviation Section, is reviewing the flight pattern and details of the flight."

Police said that the pilot took off for a regularly scheduled flight around midnight, and "navigated throughout the city during the flight and responded on several high priority runs, including a stabbing and an assault in progress. During time between dispatched runs the pilot flew a pattern which spelled out "CPD" when later viewed on a flight tracking application. This took less than ten minutes and was conducted at normal police altitude."

Video released by Chicago police shows the timeline of how the fatal police shooting of 13-year-old Adam Toledo unfolded on March 29, 2021.

Police said that "no calls for service were missed during this time and no additional fuel was utilized, but even the appearance that officers were not operating within the mission of the Aviation Section is not acceptable."

"I’m beyond frustrated," said Columbus City Council Member Elizabeth Brown on Twitter. "Last summer I proposed decreasing our helicopter fleet by one — to save dollars and reinvest in community-based safety strategies. But I was told how essential our current size is, and my measure failed. Let’s be clear: a joyride is is NOT essential work."