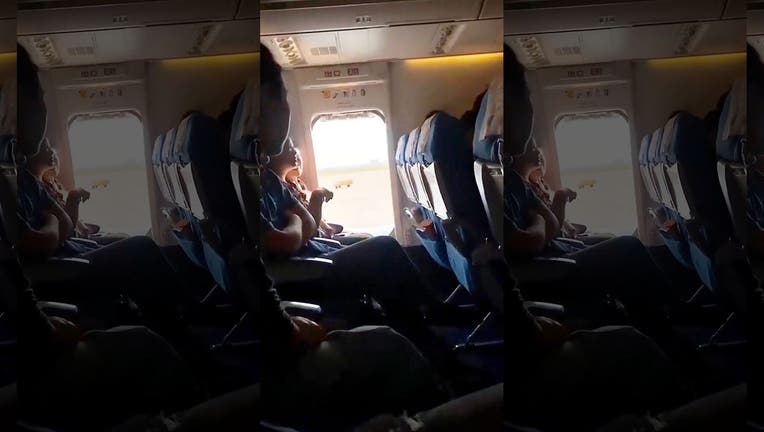 Though the passenger had been warned by flight attendants not to touch the lever on the emergency exit, which she was seated close to, she didn’t listen – and soon popped the door open. (Photo: AsiaWire)

(FOX NEWS) - You’re not supposed to do that!

One Xiamen Airlines passenger recently delayed her flight’s departure by one hour when she opened the emergency exit door of the aircraft because she reportedly felt the cabin was “too stuffy” and wanted “a breath of fresh air.” Video footage of the unbelievable sight is said to have gone massively viral on social media in China.

On Sept. 23, the unnamed woman got hot toward the end of the boarding process for flight MF 8215, which was traveling from Wuhan Tianhe International Airport to the city of Lanzhou, the Daily Express reports.

Though the passenger had been warned by flight attendants not to touch the lever on the emergency exit near her seat, as per the Sun, she didn’t listen — and she popped the door open.

The woman later justified her decision on the grounds that the cabin “got stuffy” and warranted “a breath of fresh air.”

The illicit move delayed the plane’s takeoff by one hour. A second round of safety inspections had to be carried out, while airline officials had to safely close the door again, The Sun reported.

During that time, police were called and the passenger was arrested at the scene for the offense, the Express reports.

According to the outlet, video footage of the surprising scene – starring the open plane door and confused passengers – has since gone massively viral on social media in China, racking up over 18 million views to date.

The South China Morning Post reported the woman will likely be smacked with a fine for her actions, as opening the emergency exit on a plane is classified as disturbing public order.

A spokesperson for Xiamen Airlines was not immediately available to offer further comment on the incident.