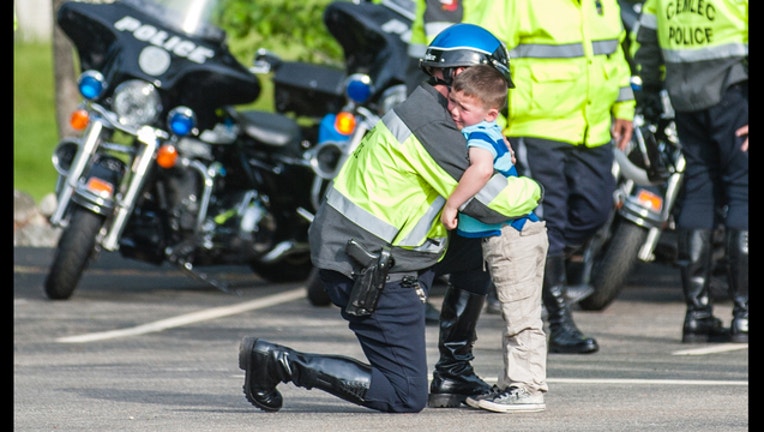 (FOX 13) - An Auburn, Massachusetts police officer was shot and killed during a traffic stop just after midnight on Sunday, May 22. In the week that followed, the New England towns of Auburn, and the officer's home town, Leciester, became living memorials for 42-year-old officer, Ronald Tarentino, Jr.

As people across the area paid their respects with flowers, memorials and candle-lit vigils, the task of laying Officer Tarentino to rest made its way to Morin Funeral Home in Leciester, where his body was brought shortly after his death.

On that day, Worcester Magazine photographer Steven King was asked by editor Walter Bird, Jr. to begin documenting the aftermath of the beloved officer's death.

King, a two-time New England Newspaper & Press Association Photographer of the Year, was likely the best person to call for such a task.

Bird wrote in an article on worcestermag.com, when word reached local media of plans to bring Tarentino's body to the funeral home in Leciester, he told King to, "go there and wait."

According to Bird, as the motorcade escorting Tarentino's body approached, King saw a young boy run toward an officer on the street outside the funeral home, and the two embraced.

At the time, King did not know the identity of the boy or the officer, but he did what any award-winning photographer would do and captured the moment.

Once the photo was posted on worcestermag.com and social media, it was clear King's picture summed up the collective terror and despair felt by families of officers after the life of one of their own is cut short.

After the image was shared thousands of times online, Bird wrote, details about the story behind the photo began to emerge.

Sluckis said when Camden learned his father's colleague and friend had died, he ran to him and said, "Daddy, please don't be a police officer anymore."

Officer Terintino was remembered by family, friends, fellow officers and his community at St. Joseph Catholic Church in Charlton, followed by his burial at Greenville Baptist Church Cemetery in Leicester on Friday, May 27.

For more from Worcester Magazine on the death of Officer Tarentino, visit worcestermag.com.