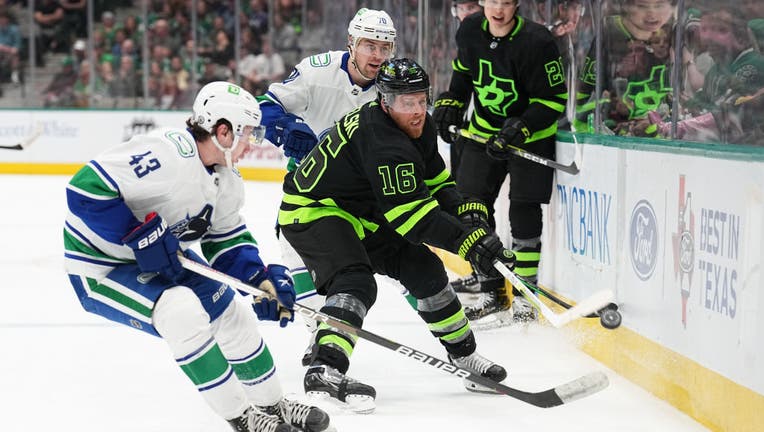 DALLAS, TX - MARCH 26: Joe Pavelski #16 of the Dallas Stars tries to keep the puck away against Quinn Hughes #43 of the Vancouver Canucks at the American Airlines Center on March 26, 2022 in Dallas, Texas. (Photo by Glenn James/NHLI via Getty Images)

DALLAS (AP) - Elias Pettersson had two goals and a pair of milestones as the Vancouver Canucks rallied past the Dallas Stars 4-1 on Saturday night.

Pettersson’s second goal was his 20th of the season and the 200th career point for the fourth-year player from Sweden.

"It’s definitely cool to get those milestones," he said.

Pettersson started a three-goal barrage in the third period. Bo Horvat and J.T. Miller also scored in the frame for the Canucks. Thatcher Demko stopped 35 shots.

Jacob Peterson scored in the second period, and Jake Oettinger made 27 saves for the Stars.

The Canucks put the game away with two goals in the final 1:06. Horvat scored into an empty net and Miller completed the scoring.

After a scoreless first period, the Stars took the lead on Peterson’s goal at 5:42 of the second. Vancouver tied the score about 10 minutes later when Oliver Ekman-Larsson knocked down a puck in the Vancouver end. In the second period, Pettersson carried the puck to the other end and sent a wrist shot from the right faceoff circle past Oettinger.

"Obviously, we got a good bounce off the post there," Demko said. "A little bit of luck, just battling to keep the puck out of the net.

"I just kept waiting for it to go in the net. Quite frankly, I’ve never seen so many open nets a team missed in succession. When that happened, I thought, ‘Karma’s with us tonight.’"

Pettersson even helped on defense on Lindell’s shot.

"I wasn’t in the right position. I should have held the middle. I just tried a little desperation slash. I got a piece of (Lindell’s) stick."

So, instead of being in a tie game, Dallas gave up the two late goals.

"When we needed a good power play we got it," Stars coach Rick Bowness said. "We just didn’t score. We get that second goal, we’re not having this conversation."

On the game’s opening goal, Jamie Benn slid a pass from the right faceoff circle into the slot for Peterson, who went to his backhand and beat Demko with a shot inside the left post.

Vancouver had the game’s first three shots on goal before Thomas Harley appeared to score for the Stars. However, the puck deflected off Demko’s leg and the left goalpost but didn’t cross the goal line. That began a streak of eight shots by Dallas. The scoreless first period ended the Stars outshooting the Canucks 14-9.

The game’s first penalty came at 15:10 of the second period, when Dallas defenseman Jani Hakanpaa went off for holding. Fifteen seconds later, Pettersson scored on the power play.

NOTES: Pettersson and Peterson have more in common than similar names. They each wear No. 40. … Vancouver’s J.T. Miller assisted on Pettersson’s goal, giving Miller seven points (four goals, three assists) in his four most recent games. Miller (52) and Quinn Hughes (48), who also assisted on the goal, have combined for 100 assists. … Benn has five points (two goals, three assists) in his last four games against the Canucks. … Dallas rookie Harley has not scored a goal in his 24 NHL games. … The Stars were 1 for 2 with their penalty kill.

Canucks: Complete a four-game trip on Monday at St. Louis.

Stars: Play the first of two consecutive games at Anaheim on Tuesday on a four-game trip.