Tom Brady vs Patrick Mahomes: Super Bowl 2021 quarterbacks and what to know

A look at Tom Brady and Patrick Mahomes ahead of the 2021 Super Bowl game.

KANSAS CITY, Mo. - Patrick Mahomes is a rising star in the National Football League, starting off as a first-round pick during the 2017 NFL Draft.

Now, he will play in his second-ever Super Bowl game in a match-up against one of the most accomplished quarterbacks of all time: Tom Brady.

Mahomes has had an already-impressive career to start, and could potentially make history as the only starting quarterback ever to win two Super Bowls by the time he’s 25.

Here are some things you should know about the Kansas City Chiefs quarterback.

How old is Patrick Mahomes?

Born Patrick Mahomes II, the star athlete celebrated his 25th birthday on Sept. 17, 2020, according to his foundation, 15 and the Mahomes, which aims to support " initiatives that focus on health, wellness, communities in need of resources and other charitable causes."

How tall is Patrick Mahomes? 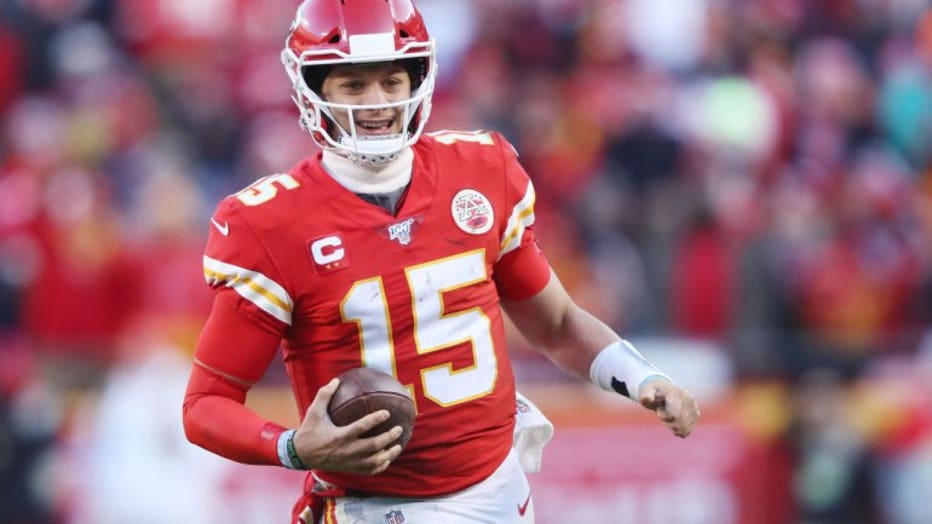 FILE - Patrick Mahomes, #15 of the Kansas City Chiefs, reacts in the second half against the Tennessee Titans in the AFC Championship Game at Arrowhead Stadium on Jan. 19, 2020 in Kansas City, Missouri. (Jamie Squire/Getty Images)

RELATED: Tom Brady: What to know about the NFL’s most accomplished quarterback

Where did Patrick Mahomes go to college?

Mahomes attended Texas Tech University from 2014 to 2016, according to NFL.com.

Some of Mahomes’ notable college football career highs, according to Texas Tech, include:

When was Patrick Mahomes drafted?

Mahomes originally entered the first round of the NFL draft as the 10th overall pick in 2017.

"The Chiefs traded the No. 27 overall pick, a third-round pick and their 2018 first-round selection to the Buffalo Bills in order to move up to the No. 10 spot where they selected Mahomes," according to the Chiefs’ website.

How many Super Bowls has Patrick Mahomes won?

So far, only one. Mahomes and the Kansas City Chiefs won against the Jacksonville Jaguars during Super Bowl LIII in 2019.

If Mahomes manages to pull off a second Super Bowl win against the Tampa Bay Buccaneers this year, he will be the second starting quarterback ever to win two Super Bowls in his first four seasons in the NFL. The first to ever accomplish this feat is Tom Brady, against whom he will be playing during Super Bowl LV.

Mahomes could also be the first quarterback in NFL history to win two Super Bowls at the age of 25, according to the Tampa Bay Buccaneers’ website.

Mahomes is rapidly progressing in his NFL career, and his track record in high school, college and now the NFL underscores his astronomical rise, according to the Chiefs’ website.

RELATED: Super Bowl 2021: Who will perform in the halftime show?

What is Patrick Mahomes’ net worth?

The quarterback was awarded with a 10-year, $450 million contract in the offseason that could earn him up to $503 million in incentives and roster bonuses, according to FOX Business.

Mahomes is obviously the top dog when it comes to average annual contract value. With his new deal, he’s set to earn $45 million annually. Kansas City worked the deal in the offseason in hopes that the creativeness of his contract would help the team retain some salary cap room to re-sign some of the other key guys on the championship-winning team.

Where is Patrick Mahomes from?

Mahomes was born and raised in Tyler, Texas which is smack-dab in the middle of Cowboys and Texans country. He attended school in the Whitehouse school district, where he would begin his prolific career in football.

Where does Patrick Mahomes live?

Mahomes and fiancé Brittany Matthews made Kansas City their permanent home in 2019 after purchasing a $1.9 million mansion, according to USA Today.

Solidifying his commitment to the city, Mahomes became part-owner of the Kansas City Royals in July of 2020, according to FOX Sports.

The apple doesn’t fall far from the athletically-talented tree.

A famous athlete in his own right, Mahomes’ father, Pat Mahomes, played Major League Baseball from 1992 to 2003. He put on uniforms for the Minnesota Twins, Boston Red Sox, New York Mets, Texas Rangers, Chicago Cubs and Pittsburgh Pirates. He pitched in 308 games, recorded a 5.47 ERA and had 452 strikeouts, according to FOX News.

The quarterback was around his father growing up and was seen at some ballparks while his father warmed up. The younger Mahomes played both baseball and football at Texas Tech and was drafted by the Detroit Tigers in the 2014 draft but did not sign.

His mother, Randi Mahomes, is the original "Mahomie" and probably the one person Chiefs fans should thank for the quarterback wearing the red and gold.

"I knew when it came to sports he was going to be able to reach whatever level he wanted," she told FOX4 in an exclusive one-on-one interview.

But she said football wasn't his first choice.

"Before his junior year in high school, he came to me that summer wanting to quit football. But I just said you`re going to regret it if you quit," she told him.

The quarterback is the eldest of three children, including his younger brother Jackson Mahomes, 19, and his sister, Mia, 8.

Mahomes has been with his now-fiancé, Brittany Matthews, since his high school days. He proposed to his longtime girlfriend in September of 2020 after winning his first Super Bowl.

The pair are expecting their first child, a girl, this month, according to the Kansas City Star.