WEATHERFORD, Texas - Authorities say a woman jumped in the driver’s seat, drove away from the arrest of the original driver and crashed into a Parker County home.

The house is destroyed. The two people who lived inside were both injured and are still in the ICU. At this time, there's no word whether the person who did it will be arrested.

The home near Weatherford was destroyed after DPS says a 2016 Chevy Camaro crashed through the front gate at 12:15 a.m. Tuesday morning.

DPS says 62-year-old Jesse Jurek and his wife, 66-year-old Deborah Jurek were inside at the time. Both were taken to Texas Health Harris Methodist Hospital in Fort Worth.

Sgt. Ricky Hunter with the Texas Department of Public Safety identified the Camaro driver as 49-year-old Catherine Jane Duffy. He says she missed the curve on Bankhead Road.

“She left the roadway and went through a fence, striking a utility pole and then coming to rest in a single-family residence,” he explained. 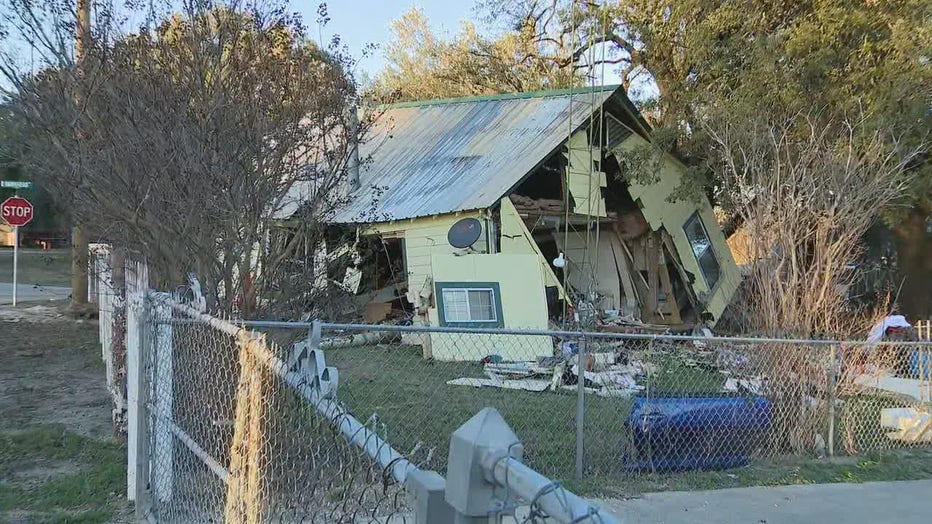 Sgt. Hunter says troopers investigated whether Duffy, who broke her leg in the crash, was impaired.

“The investigating trooper does not have any reason to believe that alcohol played a role in the crash,” he said.

But Weatherford police say an officer had pulled over the same car roughly 25 minutes before the crash. Sgt. Stewart Chalmers says one of his officers had run the license plate and conducted a traffic stop on I-20.

Weatherford police say Duffy was in the passenger’s seat while 53-year-old Harold Brown was behind the wheel.

After the officer learned Brown had an active warrant out of Haltom City for deadly conduct, they took him into custody. While the officer and Brown were out of the car, Sgt. Chalmers says Duffy climbed into the drivers’ seat and took off.

Sgt. Hunter says she was likely driving well above the speed limit when she crashed into the Jureks’ home.

DPS says they are not pursuing any criminal charges against Duffy and will likely issue a just misdemeanor citation for losing control of the car.

At this point, Weatherford police say their agency has not charged Duffy for taking off during the traffic stop.

According to public records, Duffy was previously charged for theft of property, driving with a suspended license, unauthorized use of a motor vehicle and drug possession in Dallas County and Love County, Oklahoma.