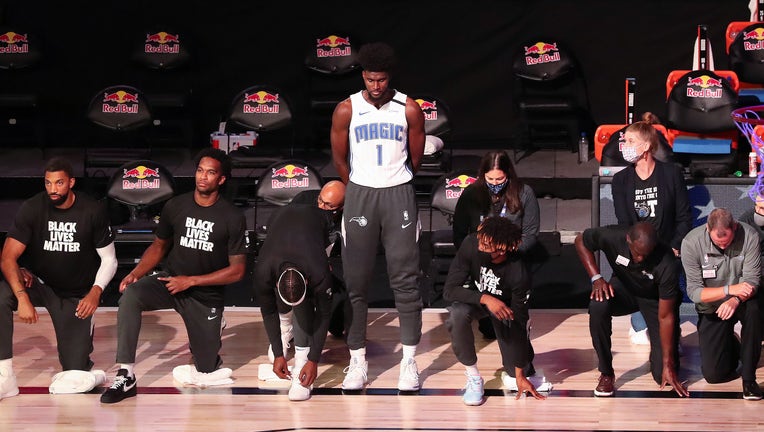 Orlando Magic forward Jonathan Isaac (1) is the lone player to stand and not wear a "Black Lives Matter" t-shirt prior to a game against the Brooklyn Nets at Disney's Wide World of Sports' HP Field House in Lake Buena Vista, Florida, on Friday, July

ORLANDO, Fla. - According to FOX News, Orlando Magic forward Jonathan Isaac stood during the national anthem on Friday as his teammates and Brooklyn Nets players knelt to protest racial injustice and police brutality.

He was said to be the only player out of the first three games of the NBA’s restarted season to stand during the anthem. He also did not wear a Black Lives Matter shirt and chose to stand with his arms at his back with his Magic jersey showing.

Magic ownership has previously praised the players' decision to kneel. FOX News said that they said the following:

"The DeVos Family and the Orlando Magic organization fully supports Magic players who have chosen to leverage their professional platform to send a peaceful and powerful message condemning bigotry, racial injustice and the unwarranted use of violence by police, especially against people of color. We are proud of the positive impact our players have made and join with them in the belief that sports can bring people together – bridging divides and promoting inclusion, equality, diversity and unity. We know this is not about the military, the men and women who serve honorably to keep our communities safe for all, or those who have paid the ultimate price to provide freedom, including freedom of expression. We’re confident the entire Magic family has immense respect for these entities and individuals. This is about coming together to end racism once and for all. We are committed to walking alongside our players – today and in the many days ahead – in the pursuit of lasting and impactful change."

The Orlando Magic are fighting for a playoff spot.