Each year, Children’s Assistive Technology Service (CATS) organizes a wheelchair Halloween contest inviting local college students in the area to design and build out of this world costumes for the children that depend on wheeled mobility.

ROANOKE, Va. - Whenever someone with a disability outgrows their rehabilitation equipment, a Virginia-based organization known as the Children’s Assistive Technology Service (CATS) reuses and refurbishes that equipment for future children in need.

Each year, CATS organizes a wheelchair Halloween contest inviting local college students in the area to design and build out of this world costumes for the children that depend on wheeled mobility.

Now in its third year, “Hallowheels” saw 22 children receive their “dream-come-true” costumes from groups of college students from Radford University, Virginia Tech, University of Lynchburg and many more, as well as members of local community groups.  Each team met with the children at an event in September, where they brainstormed ideas and were given five weeks to come up with their final designs. 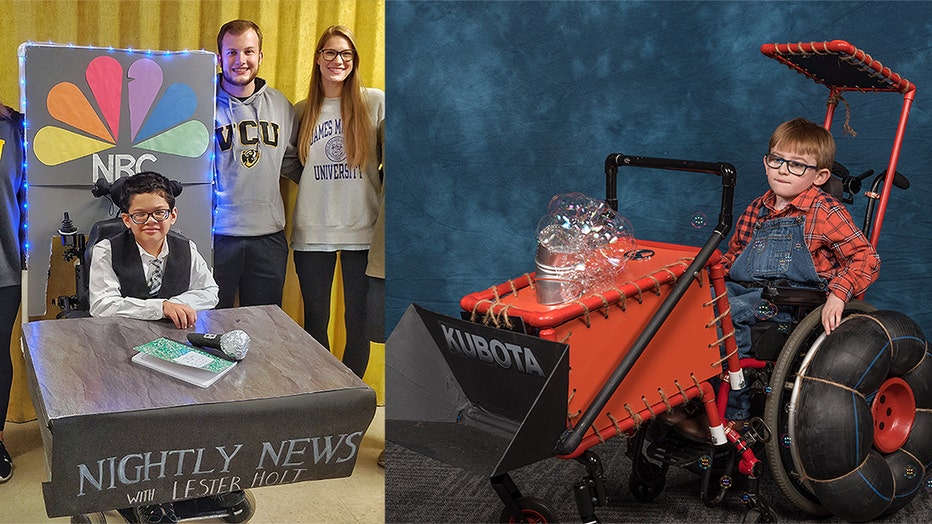 It’s designs like the Pink Lady from “Grease” and a swamp air boat that made for a truly unforgettable Halloween.

Virginia Commonwealth University created a beautiful seascape to go along with a Dory costume from “Finding Nemo,” and transformed one child into NBC News anchor Lester Holt, complete with a light-up news desk and microphone.

Voting for a favorite costume started on October 27 and continues through Nov. 3. Anyone can vote on the CATS website by making a donation, which goes back to refurbishing, storing and transporting the mobility equipment for future kids in need.

“We don't know who had more fun, the teams or the kids,” the organization said on their Facebook.

While the winning team receives a trophy for the most creative costume, CATS says all the children are winners. Two of the children even won prizes of their own when they showed off their amazing costumes at a local parade in Charlottesville.

The teams may compete against each other, but they ultimately work together as ambassadors for the organization to bring more awareness to their cause, eventually helping future generations of children get much-needed mobility access at no cost to their families.