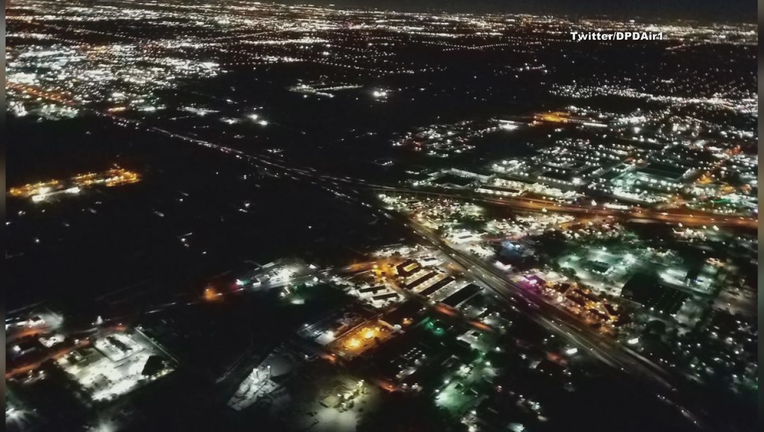 A Dallas police helicopter crew snapped a photo that essentially shows the path of Sunday's EF-3 tornado in North Dallas. The camera was pointed east from I-35 and Walnut Hill.

DALLAS - Tens of thousands of people are still in the dark and trying to clean up after Sunday’s severe weather.

Oncor has been working around the clock to get power restored to the areas that were hit by an EF-3 tornado. The utility company said in a lot of spots, it will need to rebuild systems entirely.

That’s something the company calls a “complex and lengthy process.”

The rebuilding process involves adding new utility poles, new transformers and power lines. All of that has to be done before they can even start restoration efforts for a given neighborhood.

“Oncor recognizes the challenges customers face without power, especially after such devastating storms. The Company remains focused on restoring power as quickly and safely as possible and thanks customers for their continued patience and vigilance,” Oncor said in a statement.

The company plans to use special equipment such as helicopters, drones and aerial lifts to help identify and remove large amounts of debris caught on the power lines.

Some customers never lost power at all and about 30,000 were reconnected within a few hours of losing service.

As of Tuesday evening, about 22,000 people are still waiting for their electricity to be restored. Customers can still report outages or downed power lines by contacting Oncor directly by calling 888-313-4747 or the Oncor mobile app.

Texas Baptist Men are among many groups reaching into the community and helping anyone who asks.

D'Nelle Lyons and her husband, Gary, were home when the tornado struck. They managed to take cover and escaped harm.

'We've had so much support from so many different people,” D’Nelle said. “This is an amazing neighborhood."

Help arrived on Tuesday morning with a chainsaw-toting team from Texas Baptist Men. 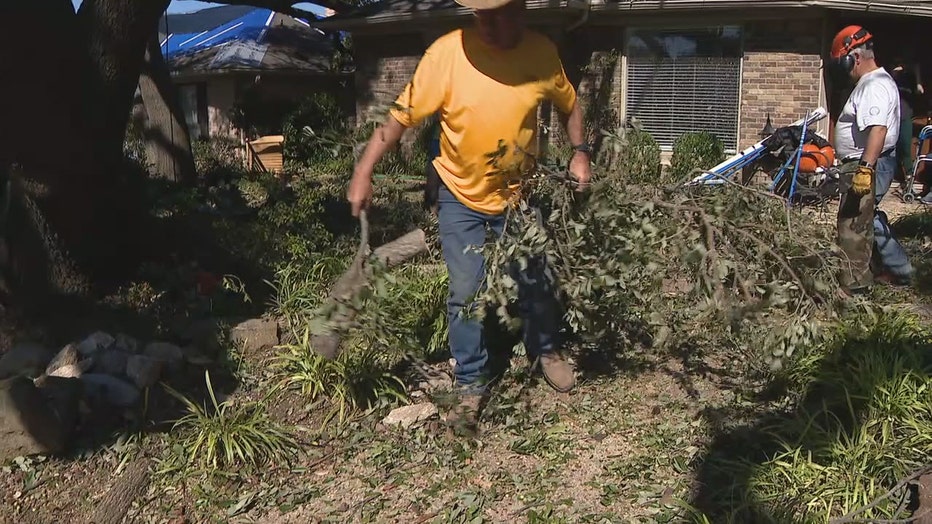 Wendell Romans says the handy work is just part of their mission.

"We do all we can. We talk to the homeowners and we try to make them feel better,” Romans said. “We love on them because that's what God tells us to do."

In North Dallas at Jose May Elementary School, there was outreach of a different kind by Texas Baptist Men for a school where power was just restored. They offered lunch and even prayers for children and families dealing with hardship.

Lakisha Miller says it was a welcomed moment for her 6 and 8-year-old son and daughter who fear the tornado might come back.

“What they're doing here, it may be small to others, but its big to my family,” she said. “It's going to get us through today and give us energy and strength that we didn't have before we came here.”

Help arrived on Tuesday morning with a chainsaw-toting team from Texas Baptist Men.

The city of Dallas is also asking residents to report storm damage using the Our Dallas App or by calling 311.

Dallas officials said sanitation services will then respond to the areas with the most reports. The department will bring in contractors to help pick up debris and downed trees. Residents can also drop off debris at sanitation stations around the city. Trash schedules will continue as normal.