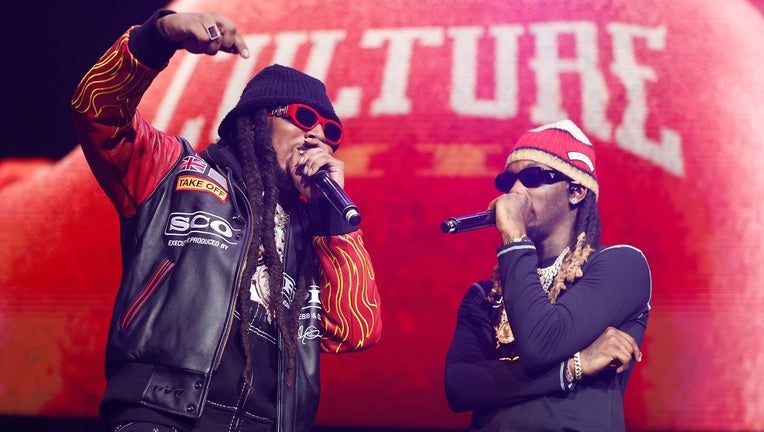 More than two weeks after his cousin Takeoff was shot and killed at a Houston bowling alley, Offset posted a brief tribute on his Instagram.

Takeoff, Offfset, and Takeoff's uncle, Quavo were part of Grammy Award-nominated trio Migos. Takeoff and his uncle had just finished a private Halloween performance at the Houston location when some sort of argument outside erupted in gunfire. Takeoff was struck by a stray bullet and died.

In his post on Tuesday, Offset says "it doesn’t feel real" referring to the death of his family member and long-standing collaborator.

"My heart is shattered, and I have so many things to say, but I can't find the words," Offset wrote adding each time he wakes up he hopes it just a bad dream.

"It’s reality, and reality feels like a nightmare," he added.

Offset lamented in the post of all the things the two will no longer be able to do.

"You have let a hole in my heart that will never be filled," he wrote.

He ended the post praying for strength to get through this difficult time and for "a lil sign or a beautiful dream" from him soon.

He signed the post with "I love you forever, 4L and after."

The post also featured a handful of pictures of the pair together.

All three members of Migos are from the Atlanta area.

The two surviving members were in attendance last Friday along with dozens of other musicians and hundreds of fans at State Farm Arena to say goodbye to the artist who was known for being "humble quiet and introspective."

His family asks anyone who would like to remember Takeoff to make donations to The Rocket Foundation, which aims to support programs using community-based solutions to stop gun violence, according to its website. Monetary donations can be made with cards or cryptocurrency online.

The website says the foundation was established in honor of Takeoff.

The Rocket Foundation says the first round of funding will be split among four organizations: