Officers march in solidarity with Dallas protesters in police-planned rally

About 500 people took part in a rally and march by police officers in Downtown Dallas in solidarity with those who have been marching and protesting since George Floyd's death.

DALLAS - About 500 people took part in a rally and march by police officers in Downtown Dallas in solidarity with those who have been marching and protesting since George Floyd's death.

Friday’s historic event was called Blue for Black Lives Matter. The protest and march was planned by two police associations.

The turnout showed many officers of all colors feel the same way. They protested police violence and systemic racism. For 90 minutes this Friday, it was the officers’ time to have their say.

Dallas Police Senior Corporal Arturo Martinez is a young officer and the man behind the historic police-planned protest. It’s the first anywhere in the country over police violence against people. 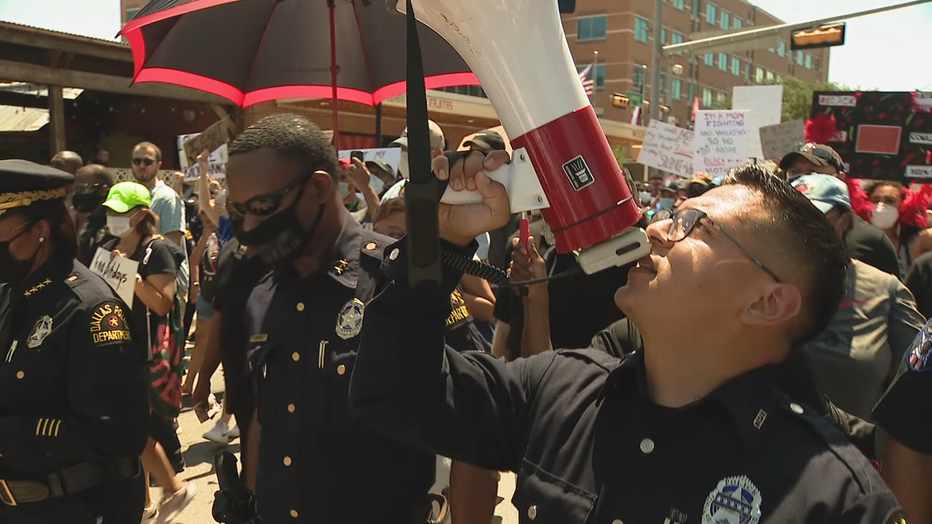 “Why are we here today? Because we are united against racism. That’s why we're here today,” Martinez said.

“What we saw in these protests, these marches that took place in Dallas was our younger generation organizing because they saw a problem and they want it fixed,” said Terrence Hopkins with the Black Police Association.

It was a unified effort of the Black Police Association and the National Latino Law Enforcement Organization planned the march. 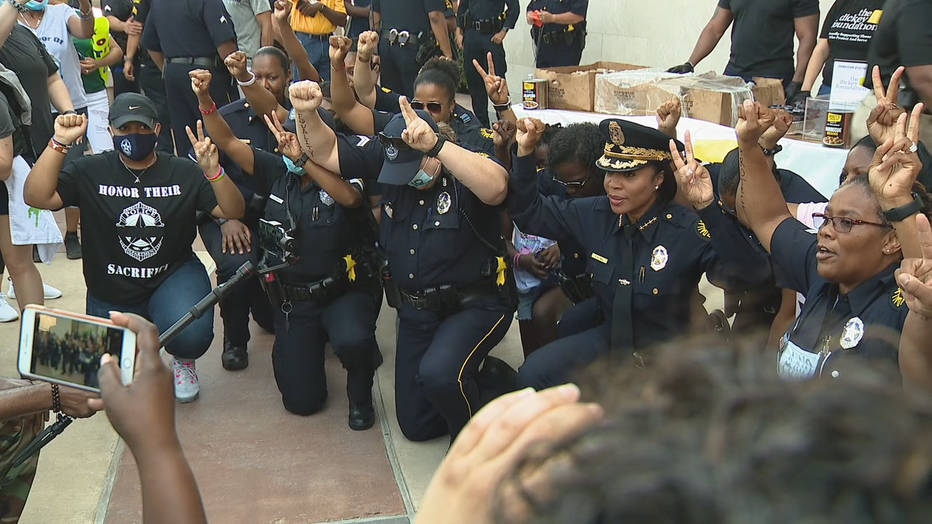 Hundreds moved down Lamar Street away from Dallas Police Headquarters. When the police and protesters got in front of South Side on Lamar, the building where Botham Jean was killed by now-convicted former Dallas Police Officer Amber Guyger, the procession paused to say his name.

Botham Jean and George Floyd were not the only names called, but also the Louisville, Kentucky, black woman shot and killed in her home by police on March 13. Friday would have been Breanna Taylor’s 27th birthday.

Officers in plainclothes and in uniform made their way to Dallas City Hall. Along the way, law enforcement also marched with some members of the Black Lives Matter movement.

The support for the solidarity march blared from the horns of vehicles on I-30 as the march moved down Cadiz to city hall. At city hall, the group took a knee for the nearly nine minutes George Floyd had a Minneapolis officer’s knee on his neck.

There was a lot of reflection and a lot of tears at city hall plaza. There were some detractors who were not moved by the police officers protesting the actions of their own. But there were others who said they were glad to see it.