As we get closer to Thanksgiving, more people are scrambling to find out where they can line up to put food on the table.

ROCKWALL, Texas - Over the weeks, we've seen a number of charitable organizations hand out free Thanksgiving meals and food boxes. The need continues to outweigh the supply.

The North Texas Food Bank held a small drive-in Rockwall Monday and ran out of food before the event ended. There's another, larger event planned Tuesday, and long lines are expected there, too.

Food banks and charities around the Dallas Fort Worth region are trying to keep up with that increased demand they haven’t seen before.

And as we get closer to the holiday, more people are scrambling to find out where they can line up to put food on the table. 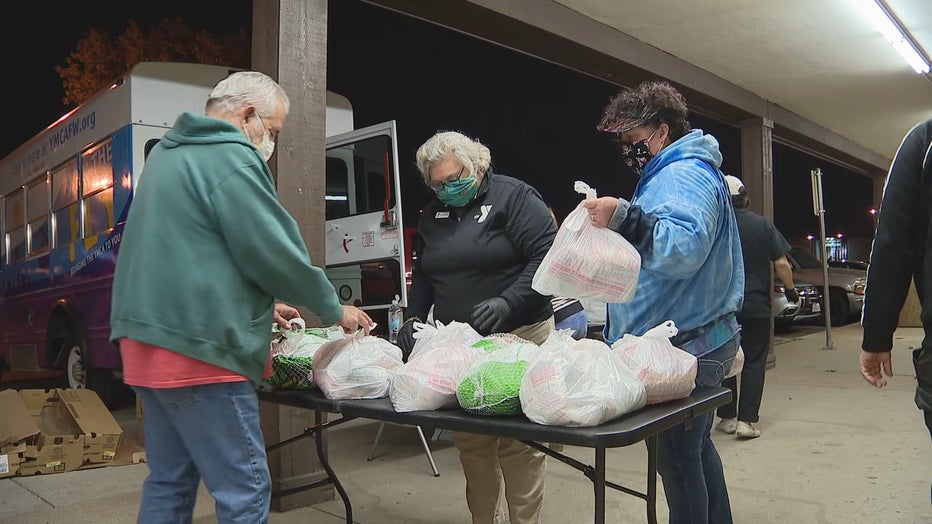 For many people, Thanksgiving sparks the question of what they are going to cook. But this year, a growing number of families are wondering how they’ll be able to afford it.

Unable to buy a turkey this year, Jeri Wilhelm took a sigh of relief to learn the nonprofit Central Arts and YMCA had teamed up for a Thanksgiving giveaway in Hurst. She says her struggling car detailing businesses has left her stressed about putting meals on the table for her kids.

And Wilhelm is not alone. Her neighbor, Teresa Quintana, says Central Art’s daily food tables, where people can grab what they need, have been a blessing, especially for her gluten-free child.

“They’ve gone a step and beyond to serve me and the community and I’m thankful. I’m really thankful,” Quintana said.

The increased need for food donations this year reaches across North Texas with increasingly longer lines at food giveaways.

The North Texas Food Bank distributed meals Monday to nearly 200 families in Rockwall but ended the event early after food ran out.

“The numbers are staggering,” said Reid Ainsworth. “It’s over 900,000 people in the Dallas area that are not receiving enough food on a daily basis. So it’s critical.”

Central Arts Executive Director Joshua Santillan says they've adjusted how they distribute food after noticing many families were embarrassed or afraid to ask for help.

"People can just grab what they need and their discretion,” he said. “That way, they don’t have to give their income or location or anything else.”

Quintana says it's a blessing that came at just the right time.

"And a lot of people are in these times of COVID-19 surviving because of that. Because of them,” Quintana said.

The North Texas Food Bank will hold another food giveaway Tuesday from 9 a.m. to noon in Garland at the Central Park Church of Christ on Centerville Road. They expect to feed 1,000 families.