$2.69M worth of medical debt paid off with church donations

A North Texas church is hoping to inspire others with a massive act of kindness.

DALLAS - A local Dallas church is hoping to inspire others with a massive act of kindness.

Church members donated money to pay off millions of dollars in medical debt for more than 2,000 families in Dallas and Rockwall counties.

Lake Pointe Church leaders say they were able to pay off nearly $2.7 million in medical debt thanks to donations from members.

This week, nearly 2,400 families in Rockwall and Dallas counties will get a letter in the mail saying that they are now medical debt-free.

“We are pleased to inform you that you no longer owe the balance on the debt referenced above to the above provider,” Lake Pointe Church Pastor Josh Howerton read aloud.  “Our forgiveness of the amount you owe is a no strings attached gift. You no longer have any obligation to pay this debt to anyone at any future time.” 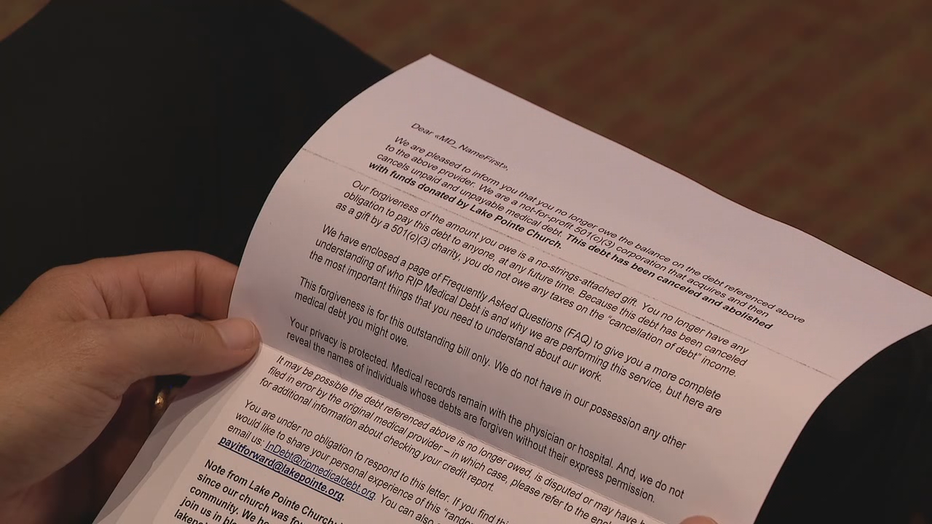 Lake Pointe Church leaders worked with a medical debt company to help negotiate down the collection amounts. And it doesn't end there. The church will also contact creditors to restore credit for the families and give them a fresh start.

The church is celebrating its 40th anniversary this month and wanted to do something special.

“We just feel like God has been so generous to us. We wanted to take our 40th anniversary to celebrate that in an outpouring of generosity to other people,” Howerton said.

The church has nearly 12,000 members across multiple campuses. Church leaders hope the sizeable donations inspire others to pay it forward.

Church leaders say this is the kickoff to Lake Pointe Church’s Pay It Forward campaign to celebrate their 40th anniversary as a church. They’re encouraging others to celebrate with acts of kindness of their own.