A growing number of North Texas organizations, along with fire and police departments, are coming together to aid Puerto Rico following hundreds of earthquakes.

GARLAND, Texas - A growing number of North Texas organizations, along with fire and police departments, are coming together to aid Puerto Rico following hundreds of earthquakes.

It all started with a conversation between one former Texas Rangers pitcher and a group of first responders.

The most powerful of those earthquakes in Puerto Rico was a 6.4 quake that struck on January 7.

Former Rangers pitcher Jose Guzman is from there and has family in that area.

On Saturday, he received a text about another earthquake just 30 miles from his family.

Now., his Texas family is fighting for the place he calls home.

A bit of help from one person, combined with many others, can go a long way.

So when Saddler heard a number of North Texas organizations were collecting donations for people recovering from hundreds of earthquakes in Puerto Rico, she jumped in.

“So when I saw it, I was just impacted by it and wanted to do something, I didn’t know all of this was going on I just wanted to give back,” she added.

FOX 4 first told you about the Guns and Hoses Foundation of North Texas on Thursday. 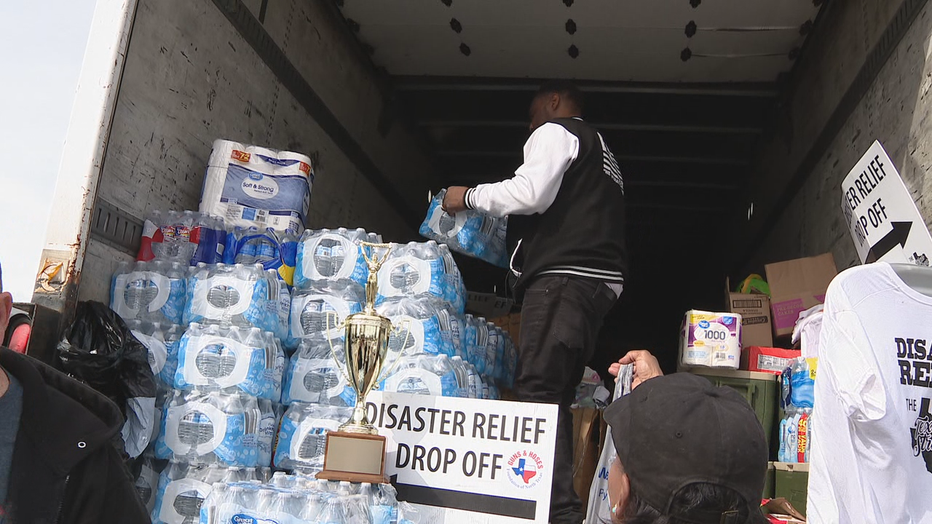 They're working with fire and police departments across the region to collect money, canned goods, water, and more.

Now, since our first story aired, the organization Kids Against Hunger Tarrant County has donated 100,000 meals.

But Guns and Hoses isn’t finished, as the group teamed up with American Black Cross at Wal-Mart in Garland on Saturday.

The groups want to physically deliver the donations to Puerto Rico.

“So anybody that supports this can rest assured it’s going to get directly in the hands of the victims. Not sit on a tarmac somewhere,” one organizer said.

But how did this get started?

“I want to help because that’s the way I was raised,” former Ranger Jose Guzman, who was raised in Puerto Rico, said. “I try to go at least once a year, if not twice. I stay in the same house I grew up. I like to go there because I see my old friends. And that’s the reason I’m doing this because I know they need it.”

Family and friends who are now living through the devastation.

“People are very scared,” he added.

“Puerto Rico, you go there, it don’t matter if they don’t know you, they treat you like you’re family,” he said.

His story is now bringing all sorts of Texans together.

You might say Guzman's extended family is right here in Texas.

It's people like Saddler, who wouldn't think twice about doing their part to help a greater cause.

“I mean, I can’t change the world. I’m just hoping that the little things that I got today help in a big way,” she said.

The groups are still working on finding the best way to transport the supplies, but Guzman said they have the right people in place to help distribute once they arrive.

There are more than 50 drop-off locations across Tarrant County. Money can be directly given to Guns and Hoses. Local fire departments are also working with a number of police departments to get in on the giving.