The severe weather threat on Friday is of utmost concern for those still re-building from the last big storm that hit the Metroplex.

DALLAS - The severe weather threat on Friday is of utmost concern for those still rebuilding from the last big storm that hit the Metroplex.

Many homes in North Dallas that were hit hard by the tornado on October 20 still rely on tarps and boards to keep water out.

And there's also a concern that debris piles and construction material could pose a threat in the event of high winds.

For some people in the North Dallas area, Thursday evening was a chance to come back and check on their homes, and make sure tarps are secure. 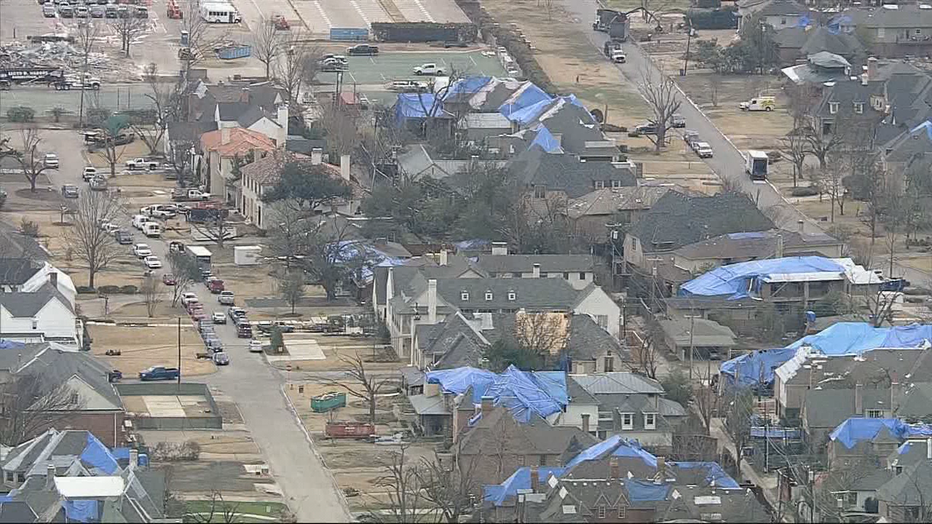 With so many of the homes exposed to the elements, it does not take much to exacerbate the damage.

There are few spots where you'll find people more cautious about the weather than those who call the 15-mile long tornado damage zone in North Dallas home.

“We think about them a little differently. We're a little more proactive when it comes to watching the weather on our phones and apps and things like that,” Helen Bowles said.

Those in the area are in various stages of recovery from the tornado that hit back on Oct. 20.

But a large number still rely on tarps and boards to keep Mother Nature from entering again.

“I know we'll be watching our roofs and ceilings just to make sure the tarping we've got stays true because we're still waiting on adjusters,” Bowles added.

Some residents in the area spent Thursday taking in Christmas decorations, along with other materials that could turn airborne in strong winds.

There are many yards still full of construction material and waste.

The city of Dallas is still in the midst of its final debris clean-up sweep that's set to wrap up Wednesday.

Officials said a vast majority of streets have had their debris piles cleared.

Some, like Drew Coleman, have yet to move back.

“We're going to be back in the summer. He thinks July,” Coleman said.

They'll wait for the storms to pass and hope to check back as soon as it's gone.

“We definitely are concerned. We have everything buttoned up pretty good right now, but we are a duplex and we just never know how good the neighbor is buttoned up,” Coleman explained. “They say it never hits the same place, but there is a concern.”