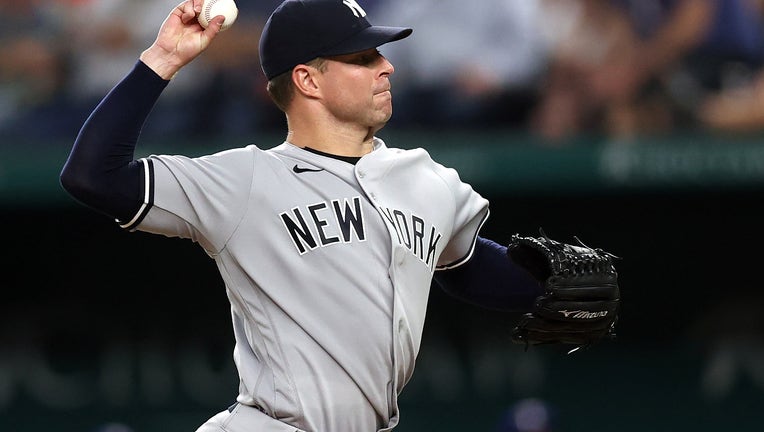 ARLINGTON, TEXAS - MAY 19: Corey Kluber #28 of the New York Yankees after the third out against the Texas Rangers in the seventh inning at Globe Life Field on May 19, 2021 in Arlington, Texas. (Photo by Ronald Martinez/Getty Images)

The 35-year-old right-hander, a two-time American League Cy Young Award winner from Coppell, came within a third-inning walk to Charlie Culberson of throwing a perfect game.

Kluber pitched his gem a night after Detroit Tigers right-hander Spencer Turnbull threw one against the Seattle Mariners, marking the first no-hitters on consecutive days since 1969.

Kluber (4-2) struck out 10 and threw 71 of 101 pitches for strikes in his ninth start for the Yankees. He was pitching on the mound when he was hurt after one inning last season for the Rangers.

Right fielder Tyler Wade made a running catch of pinch-hitter David Dahl’s flyball for the second out in the ninth inning before Willie Calhoun’s game-ending groundout to second baseman DJ LeMahieu.

It was the 12th no-hitter in Yankees history, the first since David Cone’s perfect game against Montreal on July 18, 1999. It was the fifth against the Rangers, who were also at home April 9 when San Diego native Joe Musgrove threw the first no-hitter in Padres history.