The city of Dallas is looking at ways to make a dangerous stretch of road safer after a high-speed accident killed a man who was out mowing a nearby lawn.

DALLAS - The city of Dallas is looking at ways to make a dangerous stretch of road safer after a high-speed accident killed a 48-year-old man who was out mowing a nearby lawn.

The accident happened off Jefferson and Winnetka on July 19.

Neighbors have been in contact with the city to get something done, and now the city is conducting a traffic study to look at solutions.

Starting Saturday, six lanes of Jefferson, from Polk to Hampton, will go down to four lanes for the next three months.

The city is looking at ways to make the road safer because of resident concerns and after last month’s tragedy.

"So it flew in the air, like 20 feet into the yard, and struck him and killed him," Terry Neyland recalled.

It’s been just over a month since Armando Leija Esparza was killed in the Winnetka Heights Neighborhood.

The memory of that day has stayed with several neighbors who witnessed it.

"The blue car clipped the front of the truck and literally launched into the air and flew seven, eight, ten feet in the air, spinning," Neyland said.

Neyland was out walking her dog when she saw a blue Honda Civic speeding down Jefferson.

Police said the driver ran a red light and was going 76 miles an hour on a 30 mile an hour roadway. He’s charged with manslaughter for Esparza’s death. 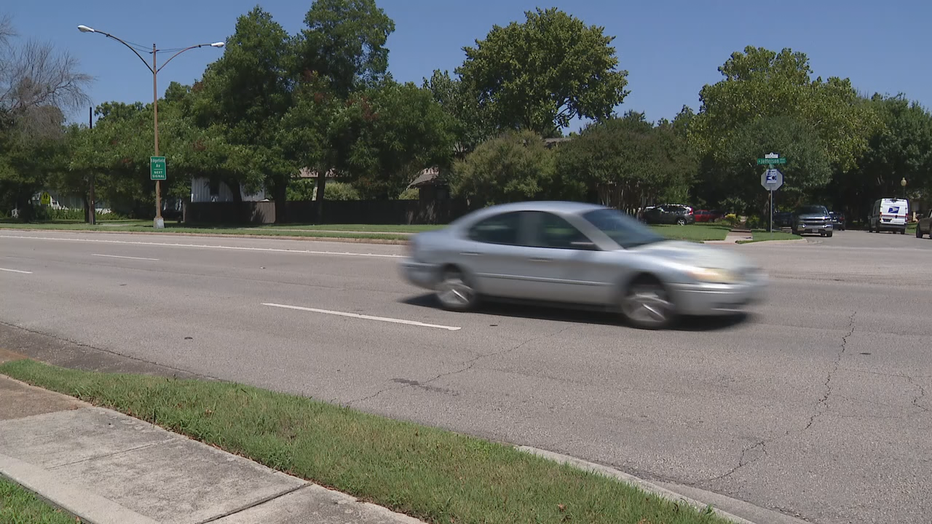 For neighbors, speeding along Jefferson Boulevard has become a problem they’ve seen turn deadly before.

The city did not have traffic statistics readily available for the number of accidents and injuries in the area, but cited the July 19th accident that killed Esparza.

"It’s sort of the last straw, it’s been more than one death," Neyland said.

The city’s traffic study will close down one lane in each direction of this six-lane roadway, from Polk Street to Hampton Road, for the next 90 days to look at solutions that could include roundabouts or other projects.

Residents said they would just like to see less traffic overall and for everyone to slow down. Whatever it takes to get that to happen.

"Car accidents are one thing, but literally to fly in the air and land on top of an individual who’s not in the road, that’s pretty crazy," Neyland added.

The city has conducted similar traffic studies earlier this year, including one on Greenville Avenue, between Meadow and Royal Lane.

That study resulted in the city repurposing one lane of traffic in that area to a two-way bike and pedestrian lane.

The Speeders Diet on Jefferson Blvd.

The city calls its strategy for the new traffic pattern being put in place in North Oak Cliff aimed at slowing down drivers, "traffic calming."

Traffic reporter Chip Waggoner explains why it’s being referred to a "speeders diet" in the video below.

Is new traffic pattern on Dallas road traffic calming or a speeders diet?

The city calls its strategy for the new traffic pattern being put in place in North Oak Cliff aimed at slowing down drivers, "traffic calming."