A deadly tornado swept through parts of New Orleans on Tuesday night, causing a trail of severe damage including destroyed homes and businesses. At least one person has been killed and many others were injured from the tornado.

NEW ORLEANS - At least one person was killed and many others were injured after a large tornado tore through New Orleans and surrounding areas on Tuesday night, leaving a trail of damage in its wake as it flipped cars and even lifted a house into the air and dropped it onto the street with a family inside.

Videos showed a large, multi-vortex tornado that went into the Arabi area, a suburb of New Orleans. It then moved east across the Mississippi River into the Lower 9th Ward and parts of St. Bernard Parish — both of which were badly damaged by Hurricane Katrina 17 years ago.

St. Bernard Parish, which borders New Orleans to the southeast, appeared to take the brunt of the weather's fury. One person was killed in the area, though St. Bernard Parish officials gave no details on how they died. Authorities added that multiple other people were injured.

Other tornadoes spawned by the same storm system caused so much damage in Texas that the governor declared a disaster in 16 counties, and shredded buildings in Alabama, where torrential rainfall was recorded. A woman north of Dallas, Texas, was also killed, according to officials.

Louisiana activated 300 National Guard personnel to clear roads and provide security and engineering support. They joined firefighters and others searching multiple structures to make sure no one had been left behind, said John Rahaim Jr., the parish's homeland security director.

Damage was reported on the ground by the National Weather Service as the storm moved west of the Arabi area, moving northeast into the city’s east. Photo credit: Drew & Matthew Burke via Twitter.

"The fire department and sheriff's department are doing search and rescue. All of our people are out there working hard to make sure our community is safe," McInnis told WVUE-TV in New Orleans.

Arabi, just east of the city’s Lower 9th Ward, was wrecked by Hurricane Katrina in 2005 and hit hard again when Hurricane Ida swept through last year. McInnis said damage stretched a number of miles across Arabi, from the Mississippi River to the levee on the neighborhood's north end. 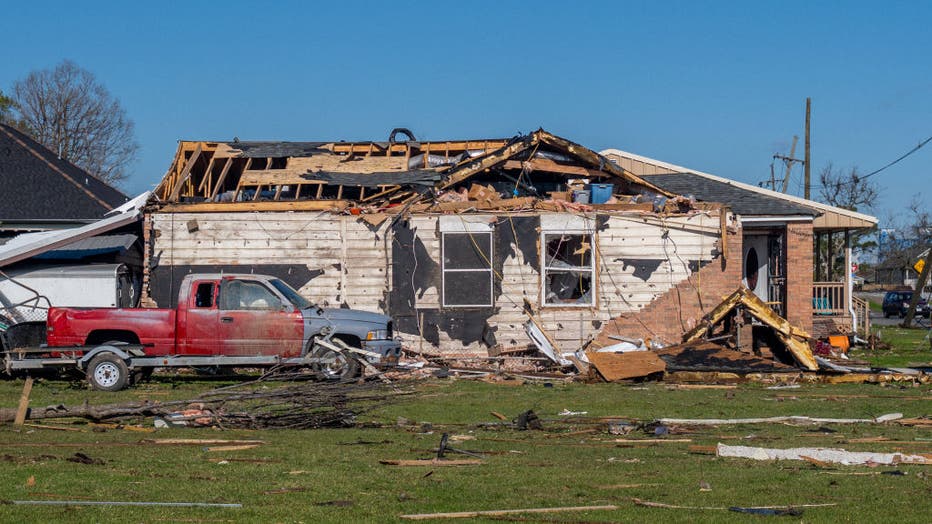 Also in Arabi, a family of three was in a home when it went airborne, and the couple emerged from the wreckage seeking help to rescue their daughter, still inside on a breathing machine, neighbors and authorities said.

"We had one rescue — a home that was actually picked up and came down in the middle of the street. A young girl was on a ventilator, her father was looking for firefighters to come help, come help," McInnis said. "And they were already in there taking care of the young lady and she’s doing fine."

Some houses were destroyed while pieces of debris hung from electrical wires and trees. An aluminum fishing boat was bent into the shape of a C with its motor across the street.

Damage pictured from a tornado on March 22, 2021, near New Orleans, Louisiana. (Credit: WVUE-TV)

One resident told WVUE-TV he could hear the tornado and its wind coming through his house.

"I put my family in the bathroom. All of our ears popped and you just knew," he said, adding he emerged from the bathroom just 10 seconds later to find his neighborhood had been heavily damaged.

A sergeant with the Gretna Police Department who lives in St. Bernard Parish also witnessed the tornado from his house.

"The path was heading toward St. Bernard Parish," said Sgt. Ashton Gibbs. "Decided to look out my window and the tornado — it was literally in front of my face."

New Orleans Mayor LaToya Cantrell tweeted late Tuesday that there were no reports of casualties or significant damage to the city. But in addition to the tornado in Arabi, another tornado was reported farther east in Lacombe, across Lake Pontchartrain, the National Weather Service said.

As the storm front moved eastward, an apparent twister shredded a metal building and shattered windows east of Mobile Bay in Baldwin County, Alabama. The weather service reported more than 8 inches of rain fell in the central Alabama city of Sylacauga overnight, and the roofs of several homes were damaged in Toxey, Alabama, where tornado warnings were issued.

The wild weather waned as it moved into South Carolina early Wednesday, but the weather service warned that isolated tornadoes remained possible in southern Georgia.

This story was reported from Cincinnati. The Associated Press and FOX Weather contributed.