People will be pumped and eager to get inside the stadium, but new a bag policy could keep uninformed fans outside the gates.

DALLAS - College football fans are gearing up for the big AT&T Red River Showdown between Texas and Oklahoma.

The game kicks off Saturday at 11 a.m. at the Cotton Bowl Stadium. But the colder-than-usual temperatures and a new security policy may catch some fans by surprise.

People will be pumped and eager to get inside the stadium, but new a bag policy could keep uninformed fans outside the gates. 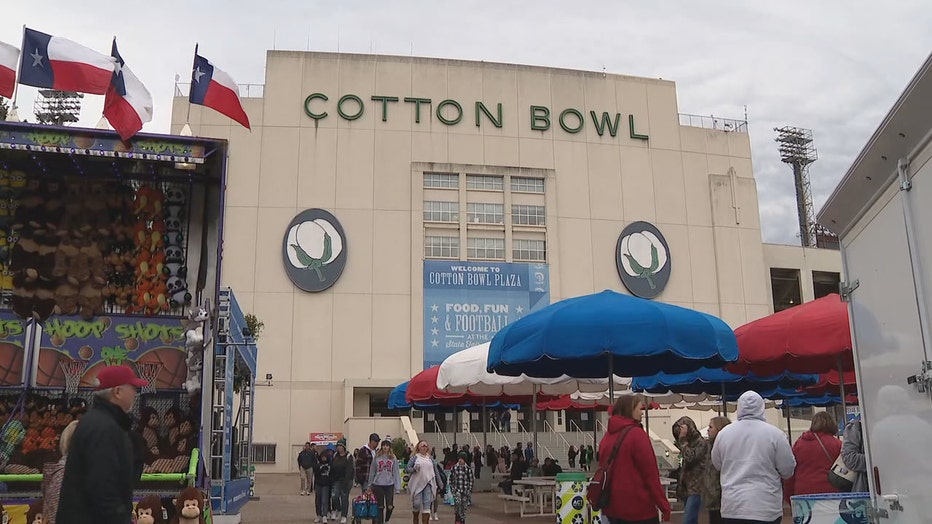 Fans are already gathering at the State Fair of Texas ahead of Saturday’s game between Texas and OU.

“There’s nothing like it with the fair and the game inside the fair,” said UT fan Rick Roberts. “It’s just wonderful.”

“The fair and the game, we drove four and a half hours,” said OU fan Leigh Burnett.

And while all kinds of bags are allowed inside of the fair itself, football fans who plan on attending the game inside the Cotton Bowl Stadium won’t be allowed to bring in much.

Approved bags are clear bags or totes not exceeding 12 by 6 by 12 inches, one-gallon storage bags or a very small clutch that is no bigger than 4.5 by 6.5 inches. Everything else is banned. 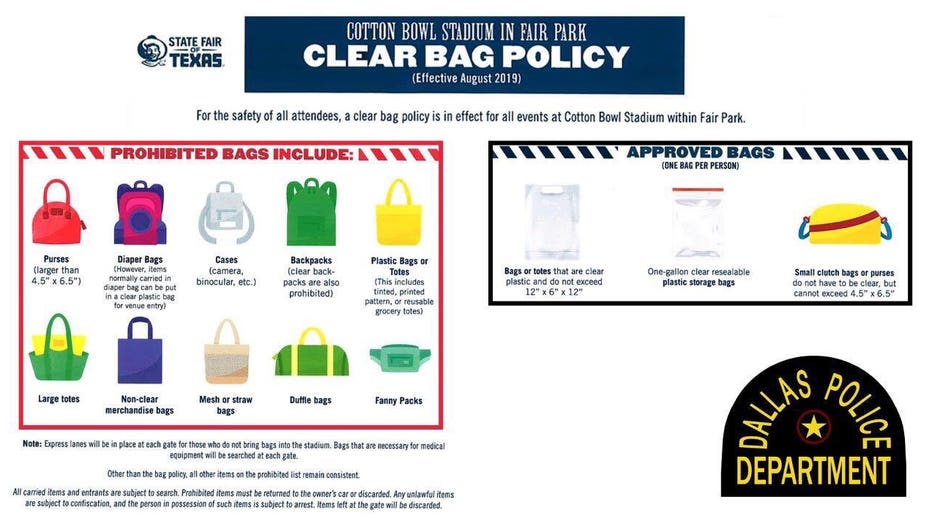 “They do that at stadiums in Oklahoma too,” said OU fan Michael Burnett. “So they should do that for the people’s safety and the safety of everybody.”

Express lanes will be in place at each gate for those who don’t wish to bring bags into the stadium. Prohibited bags will either have to be returned to the owner’s car or thrown away.

This clear bag policy follows the NFL’s policy. Bags that are necessary for medical equipment will be allowed inside and searched at each gate.

One thing that fans will have to stuff in those clear bags is extra clothing, as it's expected to be in the 40s when fans show up before the game Saturday morning.

"It’s been a while since we’ve had to wear a jacket. This is better," UT fan Don Noah said.

Last year, it was a warm kickoff, with temps close to 80 degrees, but that won’t be the case Saturday. Kickoff will see a brisk start in the 50s.

A lot of hot food will be consumed on this cool weekend.

“I get to get my Fletcher’s corny dog before and after the game, and I get to watch the game in between,” OU fan Barry Woodruff said.

Fans will be standing and yelling all no matter how cold it is.

The weather is making for a chilly Red River Showdown weekend.

“When I was a little kid, I would sit in my OU pajamas and wait to watch the game with my dad. It’s history. It’s great to be here, and Boomer Sooner.

While temperatures may be chilly, the tickets for the Red River Showdown are hot.

As of Friday, the ticketing service Vivid Seats reports the price to get into the game was nearly $470.