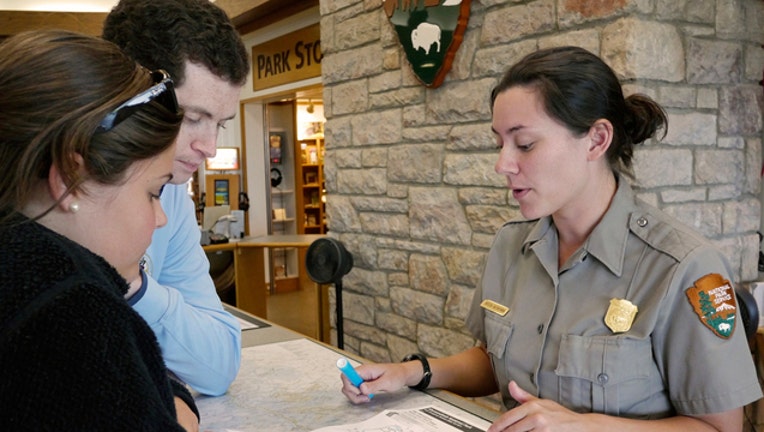 WASHINGTON (AP) - Park rangers were once again greeting visitors at some national parks across the United States and flight operations at major airports were returning to normal on Saturday, one day after a partial government shutdown came to an end.

While there were signs that some government machinery was grinding back to life after a record 35 days without funding, many federal workers and their families approached the end of the shutdown cautiously, saying they were relieved they would receive paychecks again, but would continue to restrict their spending amid fears that another shutdown could happen in weeks.

"You can only be so happy because you just have to know that it could happen again," said Rachel Malcom, whose husband serves in the Coast Guard in Rhode Island. "We're going to be playing catch up, so I don't want to overspend."

Many government agencies still had notices on their websites Saturday saying they were not fully operating due to the lack of appropriations. Calls to several agencies also went unanswered, with voicemails saying the offices were closed due to the shutdown. But many parks — from the U.S. Virgin Islands to Minnesota — were glad to open their doors to weekend visitors.

John Anfinson, superintendent of the Mississippi National River and Recreation Area, said it felt great to tell his employees to open the Mississippi River Visitor's Center. He texted his manager and said "Roll up the gate!"

"They were just waiting for the green light," he said. Park ranger Sharon Stiteler posted a video to Twitter that showed the center's gates opening with the word: "Weeeee!"

The visitor's center, located in the lobby of the Science Museum of Minnesota, saw 180 visitors in its first hour of operation, Anfinson said, and when he stopped by, the employees had "big smiles on their faces."

The National Park Service said it was working on reopening all of its parks as quickly as possible, but some parks may not open immediately depending on their staff size and complexity. The Virgin Islands National Park, Cape Hatteras National Seashore, the Wright Brothers National Memorial and the Great Smoky Mountains National Park were among the parks that reopened Saturday. Grand Canyon National Park issued a statement saying it would be fully operational this week.

Mike Litterst, chief spokesman for the National Park Service, said the nation's more than 400 parks are reopening on a rolling schedule. Some of the parks that were partially open and accessible during the shutdown are expected to get back to full operations more quickly.

"We're certainly grateful that all of our dedicated rangers and park service staff are back at work," Litterst said.

In the New York area, airport operations were returning to normal, just a day after LaGuardia Airport and Newark Liberty International Airport both experienced at least 90-minute delays in takeoffs because of the shutdown — which caused a ripple effect throughout the system. On Saturday, the Federal Aviation Administration reported that flights at LaGuardia and John F. Kennedy International Airport were landing and taking off Saturday morning with 15-minute delays. There were no other major delays nationwide, according to the FAA's website.

Some parts of the government were taking a little more time to open up.

The Smithsonian museums and National Zoo in Washington planned to reopen to the public on Tuesday. Spokeswoman Linda St. Thomas said until then, employees will check all audio-visual and interactive exhibits to make sure everything is working properly and curators will make a final check of the exhibits. Cafeterias will also be restocked and food shipments will resume, but full food service might not be immediately available.

Nigel Fields, superintendent of Virgin Islands National Park, said donations kept the park mostly open during its busy tourist season. But, he said, there is some anxiety about another closure. The park covers about 60 percent of the island of St. John, which was hit by hurricanes Irma and Maria in 2017. The shutdown affected the park service's ability to continue rebuilding, strengthening the coral reef and restoring native vegetation after the storms.

For families of workers, the government's reopening came with a mix of relief and fear. While those who were furloughed or required to work without pay will receive back pay, it's unclear when that will happen.

Crystal Simmons, whose husband serves in the Coast Guard in Connecticut, said it will likely take some time to process back pay, and then employees could be in the same situation again if another shutdown happens.

"I don't think I can really relax and go back to the way things were," she said.