NASHVILLE - Belmont University in Nashville is literally setting a world stage for the final 2020 presidential debate after first constructing it.

“I think the general spirit here is excitement. This thing is finally here and pride that we pull this off,” said John Carney, VP of Marketing and Communications. “A 27,000 square-foot tent that under normal circumstances would hold 900 working journalists in there if we were not dealing with a pandemic.

Carney says the newly-built hub for the final presidential debate of 2020 now, due to COVID-19, accommodates a streamlined 200 media outlets, including 48 10X8 platforms for live reporting and space for the event’s moderator and staff and the secret service.

“The number of media outlets that were credentialed to be here was greatly streamlined,” he said. “So we are really down to numbers that we felt were manageable in the spaces that we have to maintain distance and safe space for them to operate.” 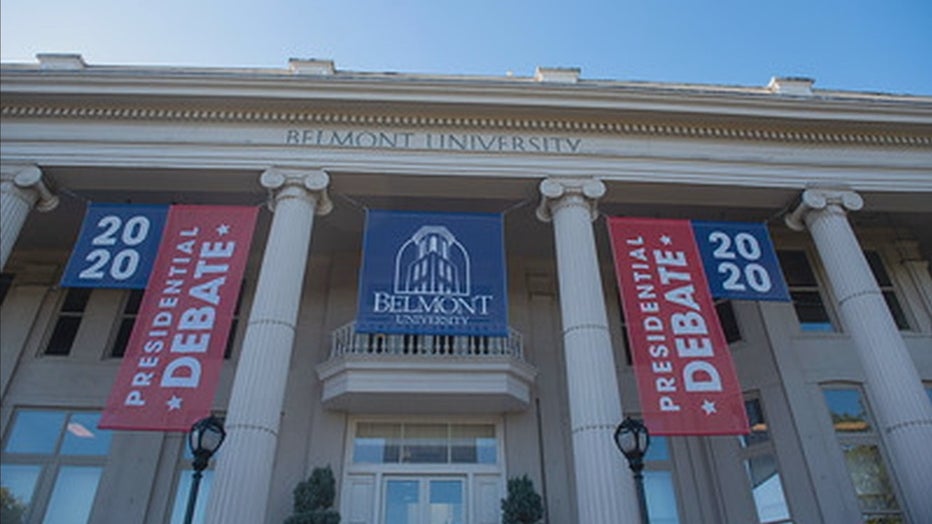 Some behind the scene details shared in a recent video explain things like the goal to prevent either candidate from sweating and the carefully-placed lighting.

But the university deflected some issues pertaining to debate logistics, including the newly-announced feature to mute the candidate’s microphone during portions and also whether or not we’ll see Plexiglas partitions separating the candidates.

“The commission on presidential debates and the campaigns are negotiating what they feel is appropriate and from a safety standpoint,” Carney said. “We are trusting them to work those details out and do the right thing, and I know they’ll land at a place where both campaigns agree on the right thing.”

“It’s a hugely collaborative effort between multiple agencies,” Carney said. “All of whom have sort of a different piece of that to not only be sure the candidates are secure and the campaigns as they come in but our campus is safe our city is safe.”

Thursday Night Football will air on FOX 4. However, you can watch the date on KDFI Channel 27 or stream it online at fox4news.com/live.