NASCAR playoff race at TMS still on hold because of rain

FORT WORTH, Texas - Like Major League Baseball, NASCAR is also in its playoffs.

However, Texas Motor Speedway obviously does not have a retractable roof like Globe Life Field. The playoff race that started Sunday in Fort Worth and was delayed because of the weather still hasn't been able to restart.

NASCAR fans and drivers are sitting idle until the weather improves. Time is running out. 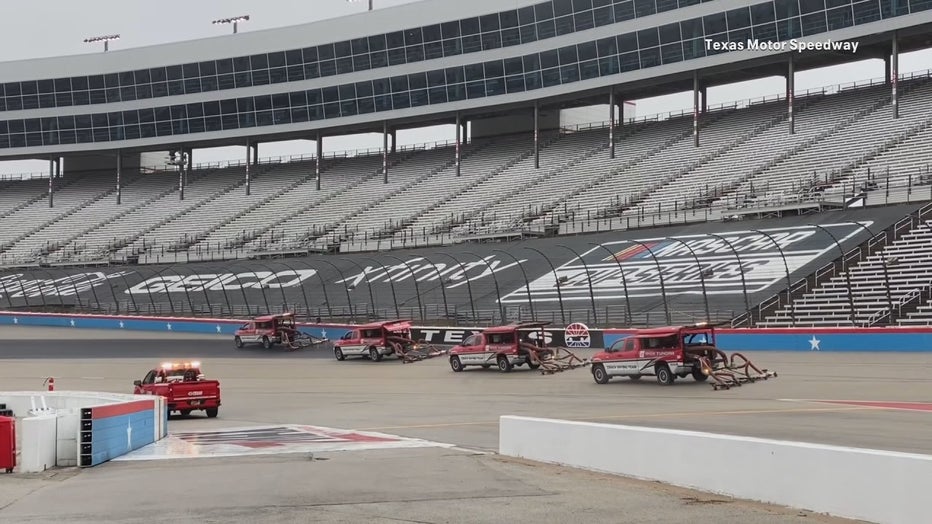 Some fans have been forced to camp out in parking lot at TMS since Sunday afternoon after the Auto Trader Echo Park Automotive 500 initially got underway at 2:30 p.m. and then was postponed 52 laps in because of slippage on the track and poor visibility from our rainy weather.

On Monday, crews spent seven hours trying to dry the track in an effort resume the race. But persistent mist and frigid temperatures forced another delay into Tuesday.

Tuesday, the jet dryers were back on the TMS track again. NASCAR drivers were hopeful of an eventual 7:30 p.m. start time.

But the weather just wouldn't cooperate, causing another postponement.

It's a NASCAR playoff race, and 115 more laps are needed to get to the halfway mark where they could call it an official race.

“I've been rained out and canceled but never sat around this long,” said driver Alex Bowman. “I don't think we've ever had a forecast look this bad. It's definitely a bummer.”

NASCAR drivers and fans are hopeful Wednesday will finally be go time.

If Wednesday is another washout, late Thursday afternoon will be the final chance to race.

NASCAR drivers have another race in Virginia this weekend. If need be, the drivers could end up coming back to TMS after that race before heading to the championship in Phoenix.