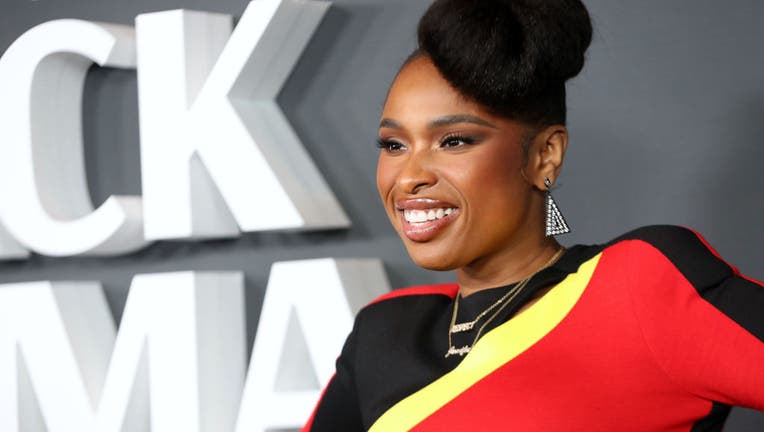 LOS ANGELES (AP) - Jennifer Hudson was named entertainer of the year at the 53rd annual NAACP Image Awards that highlighted works by entertainers and writers of color.

After Hudson accepted the award Saturday night, the singer-actor thanked the NAACP for inspiring "little girls like me." She beat out Regina King, Lil Nas X, Megan Thee Stallion and Tiffany Haddish.

"I was just standing here thinking ’It was here – the NAACP Awards – where I watched so many legends and icons that inspired me," said the Oscar and Grammy winner. "Now, I’m standing here holding an award like this. It’s because of seeing the Arethas, the Patti LaBelles, the Halle Berrys, all these legends right here on this stand that inspired me."

Hudson played her idol Aretha Franklin in the film "Respect." She was summoned to meet with Franklin in 2007 to portray The Queen of Soul shortly after Hudson won an Oscar for "Dreamgirls."

"Respect" follows Franklin from childhood through the 1972 recording of the gospel album "Amazing Grace."

"This is for Ms. Franklin’s legacy," Hudson said after she earlier won best actress.

The awards ceremony aired live on BET in Los Angeles with some talent appearing in person while others watched virtually. There was no in-person audience.

Prince Harry and Meghan, the Duke and Duchess of Sussex, were honored with the President’s Award. He showed gratitude to the NAACP for welcoming him into their community before he spoke about those in Ukraine impacted by the ongoing Russian invasion.

"We would like to acknowledge the people of Ukraine who urgently need our continued support as a global community," said Prince Harry while standing next to his wife. The couple was recognized for their outreach efforts in the U.S. and around the world.

"It’s safe to say I come from a very different background than my incredible wife," he said. "Yet, our lives were brought together for a reason. We share a commitment to a life of service, a responsibility to confront injustice and a belief for the most overlooked that are the most important to listen to."

Both talked about inspiring the next generation of activists through the NAACP-Archewell Digital Civil Rights Award. It’s a newly created award that acknowledges leaders creating change within the social justice and technology realm to advance civil and human rights.

On Friday, the inaugural award was given to Dr. Safiya Noble, who Meghan called a "visionary."

Samuel L. Jackson received the NAACP Chairman’s Award for his public service. The ceremony highlighted his acting achievements and activism including a moment when he was expelled from Morehouse College in 1969 for for locking board members in a building for two days in protest of the school’s curriculum and governance.

The video mentioned Jackson’s efforts to raise awareness toward cancer checkup for men and autism. It also spotlighted him and his wife, LaTanya Richardson Jackson, who created a performing arts center at Spelman College.

RELATED: US Army discovers MIA soldier from only Black infantry division in WWII is related to Spike Lee

"I was fortunate to grow up in a lot of different eras where I had the opportunity to use my voice and my legs and my body to fight for things that were right," said the 73-year-old actor. He has appeared in more than 100 films including Quentin Tarantino’s "Pulp Fiction" and Spike Lee’s "Jungle Fever."

Jackson also starred in several other films such as "Do the Right Thing," "Unbreakable," "Snakes on a Plane," and multiple Marvel films including "The Avengers" and "Captain America: The Winter Soldier."

"We got it done," he continued. "Right now, we still have things we need to do. The most important thing being the voting rights act. I know we can’t change that. But we can put our legs, our bodies and our voices to work to make sure that people do get out and vote – no matter what they do to keep us from doing it."

The awards ceremony featured a performance by nine-time Grammy winner Mary J. Blige, who was a co-headliner at the Super Bowl halftime show this month. She performed her single "Good Morning Gorgeous" and "Love No Limit" from New York City’s Apollo Theater.

Anthony Anderson, who returned as the show’s host, won best actor in a comedy series. With his mother in attendance, the "black-ish" star screamed out "I told you I was going to win, Momma" before he ran on stage and chest bumped her.

"I would like to thank my momma for sleeping with my daddy and making me," he jokingly said before turning serious. "I’m just a kid from Compton, California. If you dream and believe, anything is possible."

Other top awards handed out include Will Smith who best actor for his role in "King Richard" and "The Harder They Fall," which took home best film. Issa Rae won for best comedy series and Nikole Hannah-Jones was honored with the social justice impact award.

Sterling K. Brown shouted with joy when he won outstanding actor for a drama series. After Tiffany Haddish virtually presented him with the award, the "This Is Us" actor thanked the show’s network, NBC, before he joked about hanging out with Anderson’s mother.

"There’s way too many white people on my show for me to actually win this thing," he said. "But I got to say ‘Thank you, Black people for voting for me. I really do appreciate it.’"