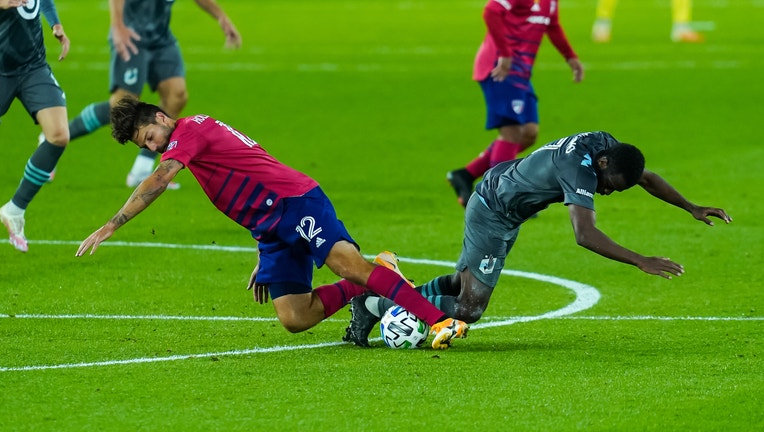 Ryan Hollingshead #12 of FC Dallas and Kevin Molino #7 of Minnesota United compete for the ball in the first half of the game at Allianz Field on September 9, 2020 in St Paul, Minnesota. (Photo by David Berding/Getty Images)

Immediately following a Dallas turnover, Robin Lod's through ball led Toye into the area for a left-footed finish that rolled between the legs of goalkeeper Kyle Zobeck to open the scoring in the 11th minute.

Molina, in the middle of the area, first-timed a one-touch pass by Romain Métanire to make it 2-0 in the 28th.

Minnesota (5-3-2) has won back-to-back games after a three-game losing streak.

Ricardo Pepi made a sliding finish of a low one-touch cross by Bryan Reynolds to trim Dallas's deficit to 2-1 in the 42nd minute, Molino converted from the spot in 70th for his second multi-goal game of the season and Santiago Mosquera redirected Matheus Simonete Bressanelli's header off a corner kick by Andrés Ricaurte to cap the scoring in the 77th minute.