With less than a week until Super Tuesday, a recent poll found that nearly half of voters don’t know who’s running for U.S. Senate in the Democratic primary.

But there is a clear leader.

With $4 million in campaign money, MJ Hegar is the only Democrat running for Senate with enough cash to advertise on TV.

“We really need to send some ass kickers and some people that are going to get some stuff done for actual working families here in Texas,” Hegar said.

The money and the TV ads have paid off, because in the recent University of Houston poll, Hegar was the clear leader at 41 percent.

The race appears to be for second place.

“You are trying to finish second. Whether or not you can introduce yourself quickly enough, or have a natural constituency to draw on to get into that runoff with Hegar. Then you have to raise some money to get into the general election,” said Cal Jillson, SMU political science professor.

Among the candidates with a chance to finish second and make a runoff with Hegar is Dallas State Senator Royce West.

West placed second in that University of Houston poll at 12.3 percent. 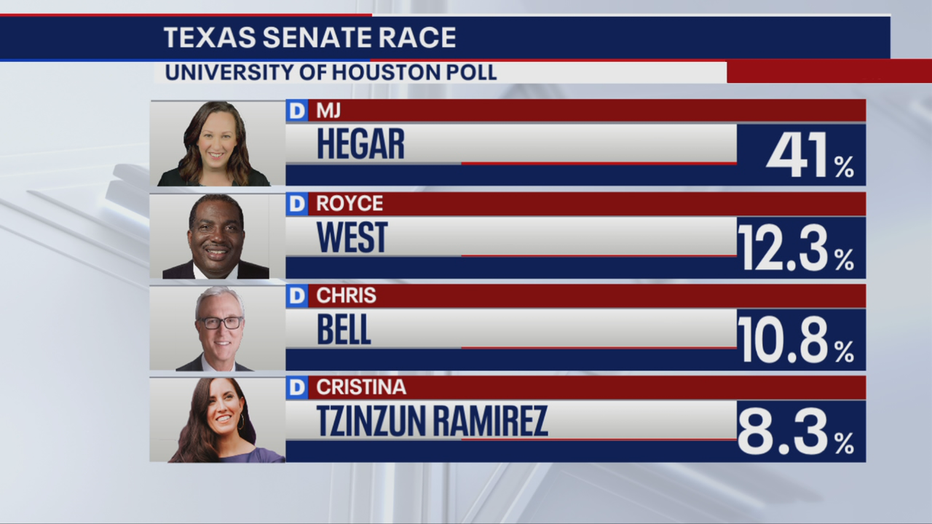 West thinks his decades of experience in the legislature and ability to bring minority groups out to vote will land him in the primary.

“The Tejano Democrats, the largest Latino organization in the state, has endorsed me as the person who they want to see as the U.S. senator. The Texas Coalition of Black Democrats did a poll and I was number one, and that tells you I am the person who can bring folks together,” West said.

Turnout on Tuesday will make the difference for who finishes second, and it’s unlikely that Hegar can get to 50 percent and avoid a runoff, but she is already looking forward to the general election, and battling incumbent Senator John Cornyn.

“It doesn’t matter who is at the top of the ticket, because when people walk into the ballot box in November, they know they're going to have a choice between the ass kisser John Cornyn and the ass kicker MJ Hegar, and I think that we're going to win,” she said.