Officer buys car seats for kids instead of citing mom

Instead of citing a mother, Officer Kevin Zimmerman took it upon himself to purchase two new car seats for her children.

MILWAUKEE - A Wisconsin police officer is receiving praise online after dipping into his own pocket to purchase car seats for the children of a woman he recently pulled over.

Officer Kevin Zimmerman with the Milwaukee Police Department pulled over a vehicle on Oct. 12 for not having the proper registration and noticed the children inside were not properly restrained, according to WTMJ-TV.

"I see three kids in the backseat and two are very young," Zimmermann told the station. "I didn't observe any child restraints or even seat belts and I asked why the kids aren't in car seats. She said, she can't afford them at this time."

The driver and mother, Andrella Jackson, told WTMJ that the family had struggled to make ends meet, including the cost of needing a new car and getting it registered.

In addition to other bills and winter clothes for the kids, Jackson reportedly told the officer that she struggled to afford proper car seats on top of it.

"I'm a father myself, I have three kids," Zimmermann told WTMJ. "I thought of my kids jumping around. What if a car hit them and they flew and got seriously hurt, if not killed?"

Instead of citing her, the officer took it upon himself to purchase two new car seats for the family. The police department shared the good deed in a post on Facebook, adding: “Thank you Officer Zimmerman for going the extra mile and going above and beyond your call of duty.”

Zimmerman later showed up to install the new seats. According to the department’s post, he also brought books and stickers for the kids. 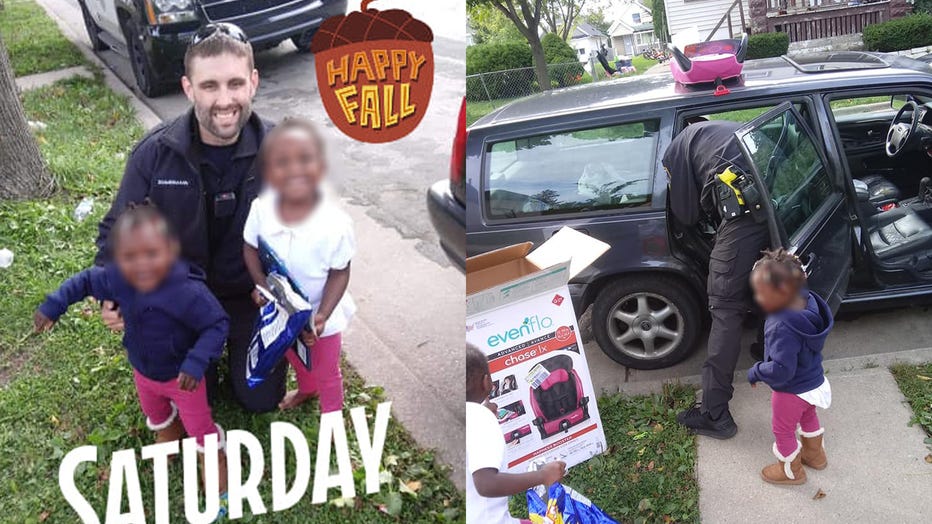 Officer Kevin Zimmerman is pictured installing the new car seats for a family after finding the kids not properly restrained during a traffic stop. (Photo credit: Andrella Jackson via Milwaukee Police Department)

Several people commented on the post, praising the officer for being “a great example.”

“A great man and a great officer serving his community,” one commenter wrote. “He saw a need and filled that need, making sure the kiddos were safe!”

“This is what a good police officer does! God bless you. Less tickets and more help,” another shared.

According to the Centers for Disease Control and Prevention, a properly installed car seat for a child can reduce the risk of injury in a crash by at least 71 percent, when compared to seat belt use alone.

Some organizations supply free or reduced-price car seats to families in need, including many local Many Safe Kids coalitions.

RELATED: Counterfeit car seats and other dangers: What parents need to know