Payne was assigned to lead a team clearing one of two buildings known to house hostages in a nighttime operation in the northern province of Kirkuk.

According to a survey of 1,018 active-duty soldiers who submitted responses between late July and early August, 42% said they “strongly disapprove of the last 4 years with Trump at the helm.

Only 38 % of respondents said they had a favorable view of the sitting president.

“It’s fair to say that Trump is not as popular as Republican nominees have been in the past among this group,” Peter Feaver, a White House adviser to former President George W. Bush, told the Military Times.

The recent poll comes after Trump defended himself earlier this month against allegations reported by The Atlantic that he mocked American war dead. Democratic rival Biden intensified efforts to frame the election as a referendum on the president’s character.

The allegations, sourced anonymously in The Atlantic, described multiple offensive comments by the president toward fallen and captured U.S. service-members, including calling World War I dead at an American military cemetery in France “losers” and “suckers” in 2018. The reported comments were confirmed independently by the AP and FOX News’ Jennifer Griffin.

“This is more made up Fake News given by disgusting & jealous failures in a disgraceful attempt to influence the 2020 Election!” Trump tweeted, as aides mounted a concerted defense of the president, with Trump’s campaign and allies taking to social media and broadcast interviews to denounce the report.

Trump saw some strain among his support within the armed forces community after his handling of the social justice protests that occurred this summer. Several military leaders spoke out against his suggestion that active-duty military personnel be used to respond to civil unrest occurring in cities across the country. 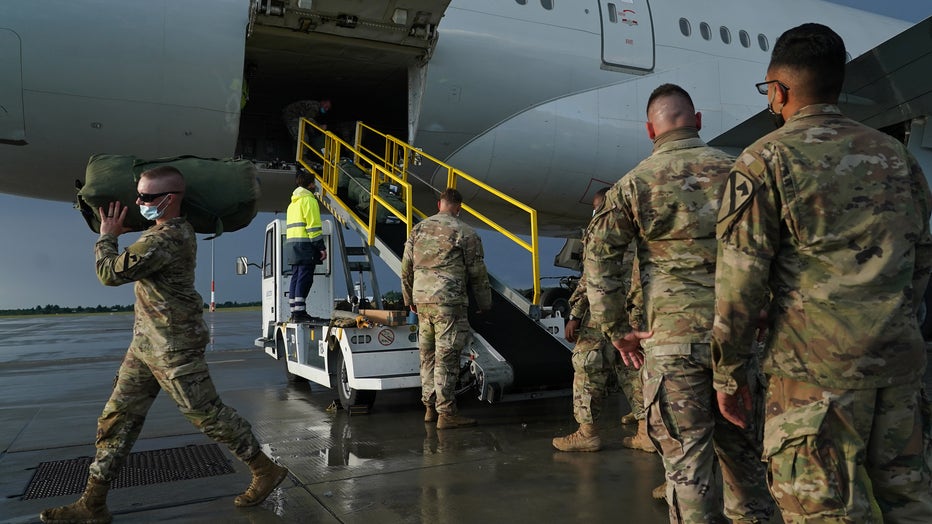 FILE - Soldiers of the U.S. Army disembark from an airplane upon their arrival at Poznan Airport on July 16, 2020 in Poznan, Poland. (Photo by Sean Gallup/Getty Images)

RELATED: ‘He tries to divide us’: Mattis blasts Trump in letter, suggests president is threat to Constitution

According to the Military Times poll, 71% of respondents said they disagreed with Trump’s suggestion to send in the military to combat protests.

In June, decorated U.S. military veteran and former Secretary of Defense Gen. James Mattis publishing a scathing rebuke of Trump’s threat to deploy soldiers to protests that first erupted across the nation in May following the death of George Floyd.

In a statement released to The Atlantic, Mattis suggested that Trump is a threat to the U.S. Constitution, saying, “Donald Trump is the first president in my lifetime who does not try to unite the American people—does not even pretend to try. Instead, he tries to divide us.”

That same month, Army Gen. Mark Milley, the nation’s top military officer, added to the already extraordinary tension between the military and Trump, declaring he’d been wrong to stride in uniform with Trump past protesters who had been cleared with tear gas from Lafayette Square in D.C., to a photo op at a church.

Milley said his presence in combat fatigues amid protests over racial injustice “created a perception of the military involved in domestic politics.”

“I should not have been there,” the Joint Chiefs chairman said in remarks to a National Defense University commencement ceremony.

The president’s June 1 walk through the park to pose with a Bible at a church came after authorities used pepper spray and flash bangs to clear the historic square and surrounding streets of largely peaceful protesters demonstrating in the aftermath of Floyd’s death.

After protesters were cleared away, Trump led an entourage that included Milley, Esper, Attorney General William Barr and others to St. John’s Episcopal Church, where he held up a Bible for photographers and then returned to the White House.