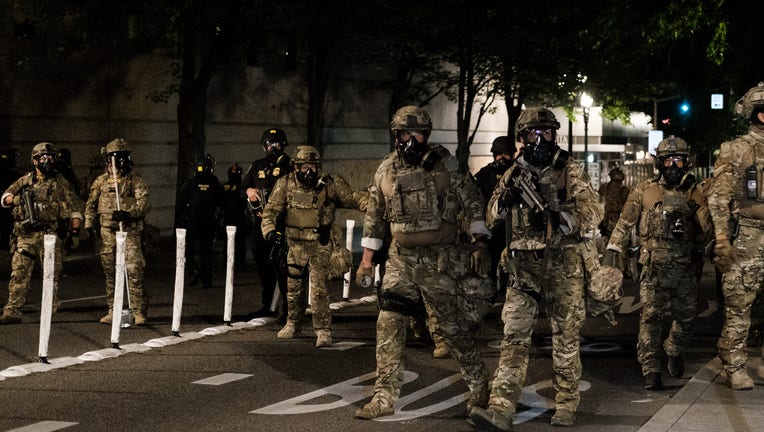 PORTLAND, OR - JULY 17: Federal officers prepare to disperse the crowd of protestors outside the Multnomah County Justice Center on July 17, 2020 in Portland, Oregon. ((Photo by Mason Trinca/Getty Images))

PORTLAND, Ore. - Militarized federal agents deployed by the president to Portland, Oregon, fired tear gas against protesters again overnight as the city's mayor demanded that the agents be removed and as the state's attorney general vowed to seek a restraining order against them.

Protests against systemic racism and police brutality have been a nightly feature in deeply liberal Portland since Minneapolis police killed George Floyd on May 25. President Donald Trump has decried the disorder and Homeland Security Secretary Chad Wolf blasted the protesters as "lawless anarchists" in a visit to the city, helping make the clashes between police and demonstrators a national focus.

The administration has enlisted federal agents, including the U.S. Marshals Special Operations Group and an elite U.S. Customs and Border Protection team based on the U.S.-Mexico border, to protect federal property. But  Oregon Public Broadcasting reported this week that some agents had been driving around in unmarked vans and snatching protesters from streets not near federal property, without identifying themselves.

Tensions also escalated after an officer with the Marshals Service fired a less-lethal round at a protester's head on July 11, critically injuring him.

The agents' actions have prompted outrage from elected officials and civil liberties groups, with Mayor Ted Wheeler demanding at a news conference Friday: "Keep your troops in your own buildings, or have them leave our city."

Democratic Gov. Kate Brown said Trump is looking for a confrontation in the hopes of winning political points elsewhere and distracting from his widely panned response to the coronavirus pandemic.

The American Civil Liberties Union sued the Department of Homeland Security and Marshals Service on Friday on behalf of journalists and legal observers who had been hit with tear gas and rubber bullets, adding the federal agencies to a lawsuit the organization had already filed against local police.

"Usually when we see people in unmarked cars forcibly grab someone off the street we call it kidnapping," said Jann Carson, interim executive director of the American Civil Liberties Union of Oregon.

Oregon Attorney General Ellen Rosenblum also sued Homeland Security and the Marshals Service in federal court Friday night. The complaint alleges that unidentified federal agents have grabbed people off Portland's streets "without warning or explanation, without a warrant, and without providing any way to determine who is directing this action."

"The current escalation of fear and violence in downtown Portland is being driven by federal law enforcement tactics that are entirely unnecessary," Rosenblum said in an emailed statement. "They not only make it impossible for people to assert their First Amendment rights to protest peacefully. They also create a more volatile situation on our streets."

Even local U.S. Justice Department authorities have raised eyebrows at the tactics. U.S. Attorney Billy Williams in Portland noted that for 50-plus nights agents had faced difficult circumstances, rebuffing protesters who tried to enter the federal courthouse or who shot commercial fireworks. But he said Friday he had asked the DHS inspector general to investigate reports that agents arrested people without probable cause.

On Friday night, hundreds of people gathered for a vigil outside the downtown Justice Center, which is sandwiched between two federal buildings, including a courthouse, The Oregonian/OregonLive reported. Across the street, dozens of other protesters entered two recently closed city parks after dismantling chain-link fencing that blocked access.

Federal agents emerged from an office building next door and used impact munitions, stun grenades and tear gas to clear the area, the news organization reported. It said its journalists did not observe any incident that might have prompted the use of the weapons.

Early Saturday, Portland police declared the gathering unlawful, saying protesters had piled fencing in front of the exits to the federal courthouse and the Multnomah County Justice Center and then shot off fireworks at the Justice Center.

Federal officers and local police then advanced simultaneously on the demonstrators to clear the streets, making several arrests as protesters threw bottles and pieces of metal fence at police, the Portland Police Bureau said. Portland Police Chief Chuck Lovell told reporters Friday that his officers are in contact with the federal agents, but that neither controls the others' actions.

Federal authorities have charged more than a dozen people with crimes related to the protests so far, Oregon Public Broadcasting has reported.

One video showed two people in helmets and green camouflage with "police" patches grabbing a person on the sidewalk, handcuffing them and taking them into an unmarked vehicle while refusing to identify themselves.

Customs and Border Protection said in a statement that its agents had information indicating the person in the video was suspected of assaulting federal agents or destroying federal property.

"Once CBP agents approached the suspect, a large and violent mob moved towards their location. For everyone's safety, CBP agents quickly moved the suspect to a safer location," the agency said. However, the video shows no mob.

In another case, Mark Pettibone, 29, said a minivan rolled up to him around 2 a.m. Wednesday and four or five people got out "looking like they were deployed to a Middle Eastern war."

Pettibone told The Associated Press he got to his knees as the group approached. They dragged him into the van without identifying themselves or responding to his questions and pulled his beanie over his eyes so he couldn't see, he said.

Pettibone said he was put into a cell but allowed to leave after he asked for a lawyer.