The owner of a jewelry store in Mesquite is still smiling even after getting a ticket for his Christmas display.

MESQUITE, Texas - A Mesquite business got a bah humbug citation to take down the big inflatable Santa that's on the roof.

The two-and-a-half story tall Santa has been a tradition for Dallas Diamonds for some 15 years. There's never been a problem until now.

But instead of being a Scrooge about it, the city does have some Christmas spirit.

This inflatable Santa is 25 feet tall. It lights up at night and is easy to see by anyone driving by. Still, new code changes say it’s a safety concern and not allowed.

A pending citation ticket given to Dallas Diamonds says Santa cannot be on the roof.

Owner Dallas Wottlin says customers have been able to check out the 25-foot inflatable over the holidays for the past 15 years. 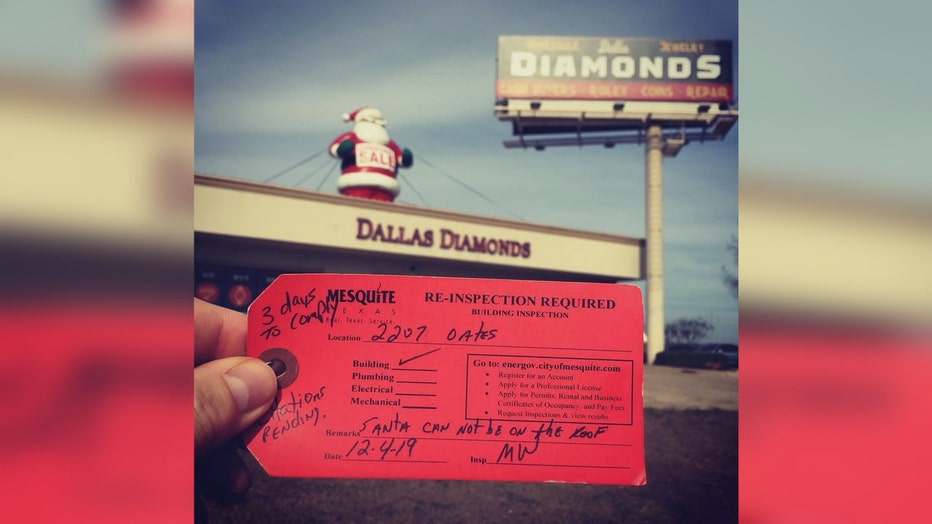 The jewelry store is decorated with all sorts of Christmas spirit. So, they were shocked to learn that after all these years, a notice explained they were in trouble for having Santa.

“It’s very important to know that this is not a Santa issue,” explained Wayne Larson with the city of Mesquite. “This is a safety issue.”

The city says the business received a citation because it modified an ordinance last year.

“Any business is allowed to submit a request to put an inflatable sign on the ground in front of their business,” Larson said.

But the city says businesses are not allowed to put signs of any sort on top of a roof. That includes inflatables like Santa.

The city tells FOX 4 that the company hired by the jewelry store had been told about the changes and. This year, they applied for a permit to put Santa on the ground. But before that permit was approved, the company went ahead and put it on the roof.

“I couldn't believe that we were getting red-tagged for having Santa Claus on our roof for God’s sake,” Wottlin said.

Wottlin says the company he hired never told him that. But in the Christmas spirit for this year, he says the city is giving him until after the holiday to take down the sign.

After a number of frustrated community members and customers voiced their anger on social media, Wottlin received a visit from Mayor Bruce Archer.

“He wanted us to know it wasn't their intent to crush the Christmas spirit in any way,” the business owner said.

Wottlin is grateful for the city’s leniency — at least for this Christmas season.

“Santa Claus is still coming to town,” he said. “And he’s still on the roof.”