The 63-year-old woman did not fit the typical mold of a wildland firefighter, but those who knew her said she was invaluable on the team.

Inspired by her son, at age 58, former hairdresser Diana Jones decided to change careers five years ago and become a volunteer firefighter.

Those who knew her said she was great at her job, because she always put others needs above her own.

When the battalion chief for Fresno, California, Brian Price, met Jones, who was a grandmother of nine and great-grandmother of one, he wasn't sure what to expect.

“Part of being a task force leader is you size up your task force,” he said. “My first impression of Diana was, I'm not sure here. She doesn't fit the normal mold I was expecting for a wildland firefighter. After two days of work, significant operations, it became incredibly apparent Diana was a consummate professional.”

The retired hairdresser, who had two sons and two stepsons – all first responders - was inspired to become a volunteer firefighter by her son, Ian Shelly, a captain with the Cresson Volunteer Fire Department. 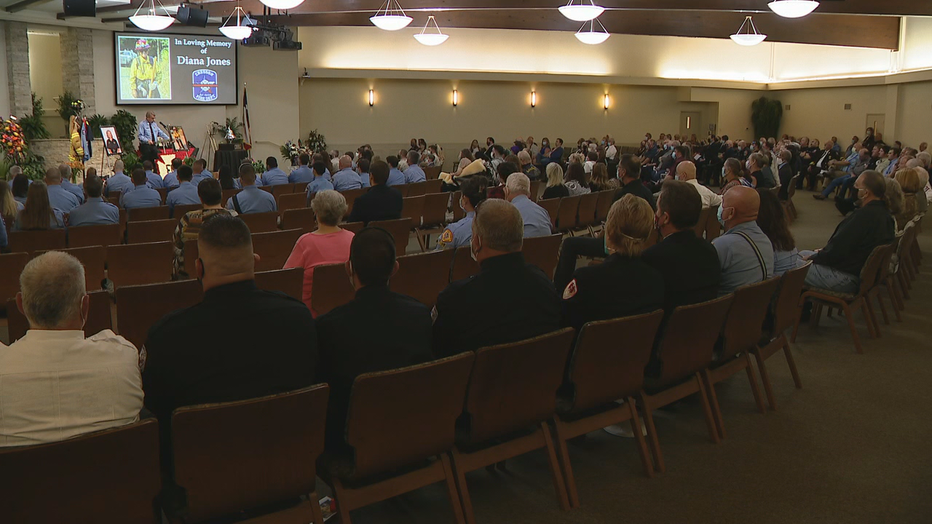 Price said her age turned out to not be a factor, and her skills made her a valuable member on the team battling the August complex fire, the largest wildfire in California history, which is still less than one-third contained as of Saturday.

“Incredible communicator. An invaluable skill when lives are on the line, when there is pressure,” her son said.

Jones was on her 13th day straight, when she and two other firefighters were involved in a crash.

According to reports, they were trying to escape an area of the fire that quickly became more active.

“She was one of the first crews there,” Estes said.

She added that Jones and her team helped save her town.

“Had an evening where the fire raced down Eagle Peak, got really close, within two miles, we were a little scared. These guys showed up and did their job really well,” Estes explained.

Jones was remembered for stepping up to do the jobs no one else wanted to do when no one was watching.

“I only knew her for 5 days, I came from California as a result of that impact. You can only imagine the impact she has had on these people,” Price added.

RELATED: Remains of firefighter killed in California wildfires being returned to North Texas