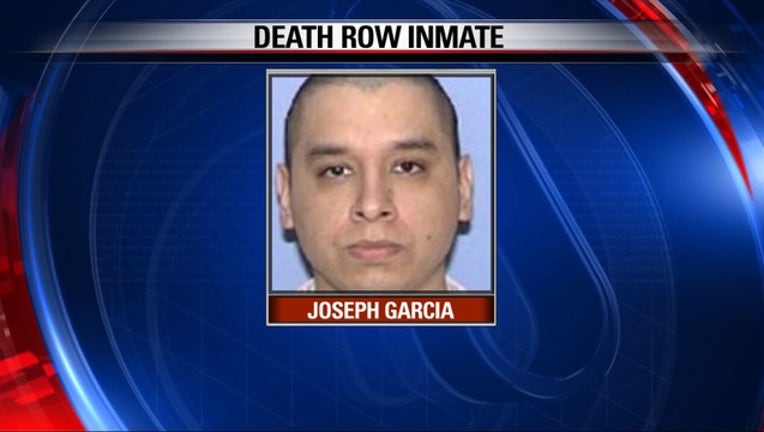 HUNTSVILLE, Texas (AP) - A member of the notorious "Texas 7" gang of escaped prisoners was executed Tuesday evening for the fatal shooting of a suburban Dallas police officer during a Christmas Eve robbery nearly 18 years ago.

Asked by the warden if he had a final statement, Garcia replied: "Yes, sir."

"Dear heavenly Father, please forgive them, for they know not what they do," Garcia said.

He then paused, for nearly a minute, before speaking again as the muffled revving of motorcycles outside the prison ridden by a group of bikers who support police could be heard inside the death chamber.

"To some of you," Garcia said, pausing again as the lethal dose of the sedative pentobarbital apparently had already started.

"They've already started and I ain't even finished," he said.

He gasped three times and snored twice before all movement stopped. He was pronounced dead at 6:43 p.m.

Garcia, 47, became the 22nd inmate put to death this year in the U.S. and the 12th given lethal injection in Texas, the nation's busiest capital punishment state.

Garcia, who was serving a 50-year sentence for murder, was among a group of inmates who escaped from a South Texas prison that month and committed numerous robberies, including the one in which they shot Hawkins 11 times, killing him.

Hawkins had just finished Christmas Eve dinner with his family when he responded to the call about the robbery at a sporting goods store and was ambushed.

The escaped inmates were eventually arrested in Colorado, ending a six-week manhunt. One of them killed himself as officers closed in and the other six were convicted of killing Hawkins and sentenced to death.

Garcia was the fourth of the group put to death. Two others remain on death row.

Garcia's attorneys had asked the U.S. Supreme Court to stop his execution, arguing he never fired his gun at Hawkins or intended to kill him. One of his lawyers, J. Stephen Cooper, said prosecutors didn't have any information that showed his client was one of the shooters.

Garcia was convicted under Texas' law of parties, in which a person can be held responsible for another individual's crime if he or she assisted or attempted to help in the commission of that crime.

At the time of the prison break, Garcia was serving time for the slaying of Miguel Luna Jr. in San Antonio. Luna's parents and his three daughters were among witnesses to Garcia's execution, along with two friends of Hawkins. They did not make themselves available to reporters following the punishment.

Toby Shook, the lead prosecutor who handled Garcia's case and the five others who were tried, said that while authorities couldn't narrow down which escaped inmate used which gun to shoot Hawkins, the inmates acted as a team to commit the robbery and the officer's murder.

Shook said Garcia's case is a clear example of why the law of parties is needed in certain cases.

"He was up to his ears in murder and mayhem out there. He was actively participating in everything," said Shook, now a defense attorney in Dallas.

Shook said Garcia's execution will be another step to getting closure for Hawkins' family and law enforcement.

"Ultimately, we can finally close the book on them when the punishments are all completed," he said.