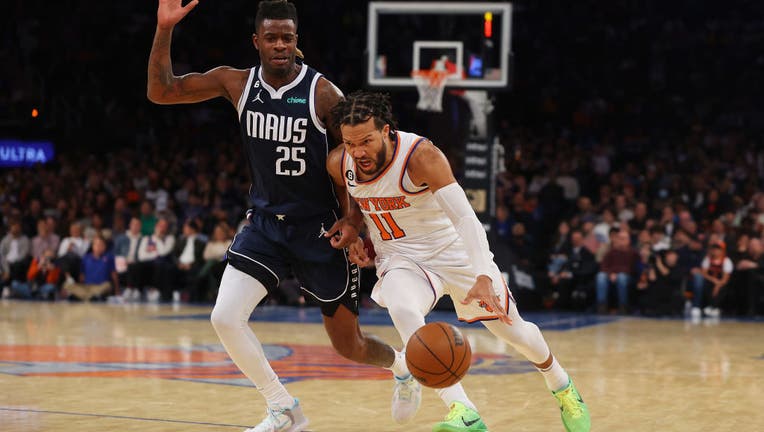 NEW YORK, NEW YORK - DECEMBER 03: Jalen Brunson #11 of the New York Knicks drives to the net against Reggie Bullock #25 of the Dallas Mavericks at Madison Square Garden on December 03, 2022 in New York City NOTE TO USER: User expressly acknowledges a

NEW YORK (AP) — Luka Doncic had a game-high 30 points, Tim Hardaway Jr. chipped in 28 points against his former team, and the Dallas Mavericks beat the New York Knicks 121-100 on Saturday.

Spencer Dinwiddie scored 17 points for Dallas, which outscored New York 69-41 in the second half for just its second win seven games.

Forward Julius Randle led the Knicks with 24 points, and Immanuel Quickly chipped in 23. Leading scorer Jalen Brunson had 13 points playing against Dallas for the first time since he signed with the Knicks on July 12, but New York fell for the sixth time in its past eight games.

Hardaway who exacted revenge against his former team, which whom he played 254 games over parts of four seasons. Hardaway had 17 points in the third quarter, including five 3-pointers, during a 27-6 run.

Doncic, the NBA’s leading scorer, had just 11 points on 3 of 11 shooting in the first half. But he took over in the third, scoring 19 points on 8 of 10 shooting. Dallas outscored New York 41-15 in the third quarter, turning a tight game into a rout.

The Knicks led by as many as 15 in the second quarter, but Dallas turned up the defensive intensity and cut New York’s lead to seven, 59-52, at halftime.

Dallas was without center Christian Wood (non-COVID illness). He had scored 20-plus points in five of the Mavericks’ previous eight games. … Five Mavericks players — Hardaway, Reggie Bullock (10 points in 25 minutes), Frank Ntilikina (0 points in 5 minutes), Theo Pinson (0 points in 4 minutes) and Kemba Walker (DNP) — previously spent time with the Knicks. … Walker, who played 37 games for the Knicks in 2021-22, was on the Mavericks bench but did not dress after signing a one-year contract with Dallas on Tuesday.