Thousands of students, environmental activists and residents of Mauritius are working around the clock to reduce the damage done to the Indian Ocean island from an oil spill after a tanker ran aground on a coral reef.

Thousands of students, environmental activists and residents of Mauritius were working around the clock Sunday, trying to reduce the damage to the Indian Ocean island from an oil spill after a tanker ran aground on a coral reef.

An estimated 1 ton of oil from the Japanese ship's cargo of 4 tons has already escaped into the sea, officials said. Workers were seeking to stop more oil from leaking, but with high winds and rough seas on Sunday there were reports of new cracks to the ship's hull.

RELATED: Study projects plastic waste in oceans will triple by 2040 — but there's something we can do

Prime Minister Pravind Jugnauth has declared a state of emergency and appealed for international help. He said the spill “represents a danger” for the country of 1.3 million people that relies heavily on tourism and has been hurt by travel restrictions caused by the coronavirus pandemic. 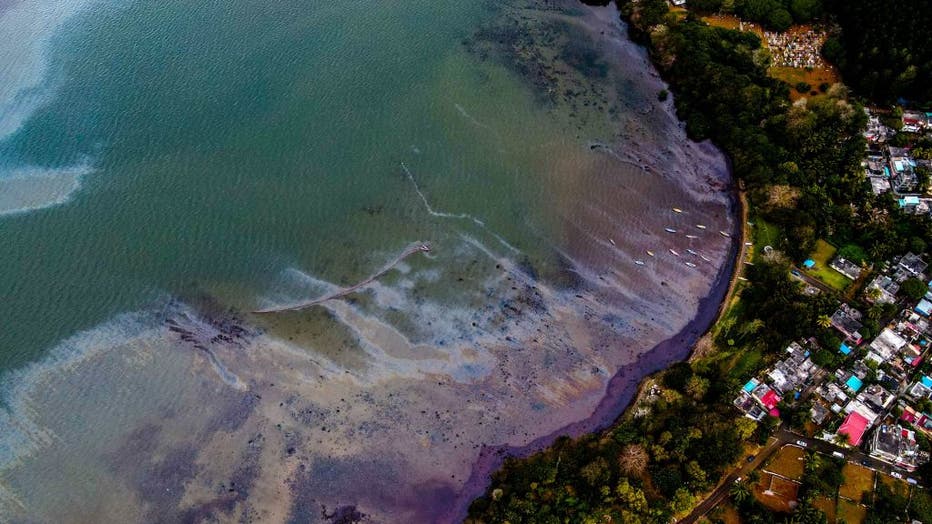 FILE - This aerial view taken on August 6, 2020 shows a large patch of leaked oil from the vessel MV Wakashio, belonging to a Japanese company but Panamanian-flagged, that ran aground near Blue Bay Marine Park off the coast of south-east Mauritius. (AFP via Getty Images)

Satellite images show a dark slick spreading in the turquoise waters near wetlands that the government called “very sensitive.” Wildlife workers and volunteers, meanwhile, ferried dozens of baby tortoises and rare plants from an island near the spill, Ile aux Aigrettes, to the mainland.

“This is no longer a threat to our environment, it is a full-blown ecological disaster that has affected one of the most environmentally important parts of Mauritius, the Mahebourg Lagoon,” said Sunil Dowarkasing, an environmental consultant and former member of parliament.

“The people of Mauritius, thousands and thousands, have come out to try to prevent as much damage as possible,” said Dowarkasing, who spoke from the relief efforts at Bois des Amourettes by the lagoon.

He said people have created long floating oil booms to try to slow the spread into the lagoon and onto the coast. The hastily made fabric booms are stuffed with sugar cane leaves and straw and kept afloat with plastic bottles, he said. People are also using empty oil drums to scoop up as much oil as possible from shallower waters. 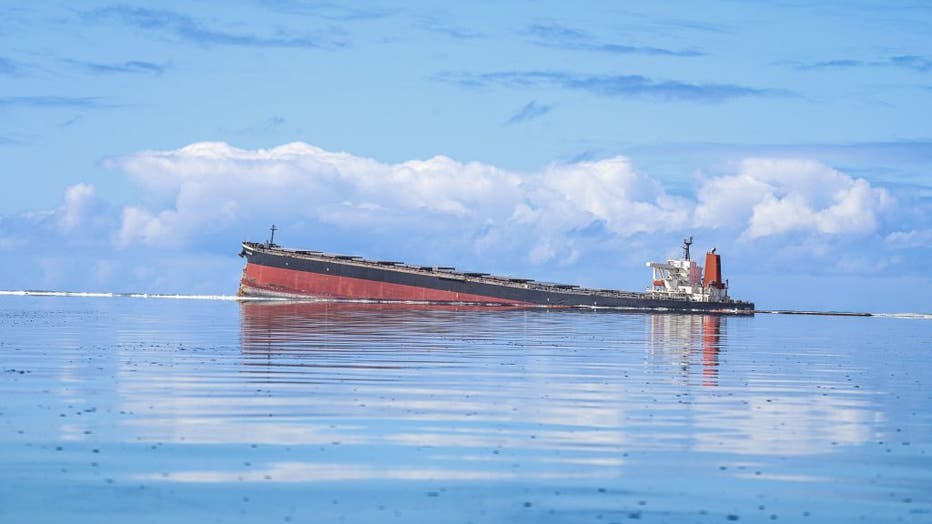 FILE - This general view taken on August 7, 2020, shows the vessel MV Wakashio, belonging to a Japanese company but Panamanian-flagged, that ran aground near Blue Bay Marine Park off the coast of south-east Mauritius. (DAREN MAUREE/L'Express Maurice/AFP via Getty Images)

University students and members of the local Lions and Rotary clubs are among the volunteers, he said.

“We are working flat out. It's a major challenge, because the oil is not only floating in the lagoon, it's already washing up on the shore,” said Dowarkasing. “The booms are really working in many spots.”

He said the steady winds and waves have spread the fuel across the eastern side of the island.

“We've never seen anything like this in Mauritius,” he said.

The lagoon is a protected area, created several years ago to preserve an area in Mauritius as it was 200 years ago.

“The coral reefs had begun to regenerate and the lagoon was getting back its coral gardens,” said Dowarkasing. “Now this might all be killed again by the oil spill.”

A French military transport aircraft was carrying pollution control equipment to Mauritius and a navy vessel with additional material planned to sail from the nearby French island of Reunion.

Residents and environmentalists alike asked why authorities didn’t act more quickly after the ship, the MV Wakashio, ran aground on a coral reef on July 25.

“That’s the big question,” Jean Hugues Gardenne with the Mauritian Wildlife Foundation told The Associated Press. “Why that ship has been sitting for long on that coral reef and nothing being done.”

For days, residents peered out at the precariously tilted ship as a salvage team arrived and began to work, but ocean waves kept battering the ship. Cracks in the hull were detected a few days ago and the salvage team was quickly evacuated. Some 400 sea booms were deployed to contain the spill, but they were not enough, he said.

In Japan, officials of the company that owns the ship, Nagashiki Shipping, and the ship’s operator, Mitsui O.S.K. Lines, apologized Sunday for the oil leak. 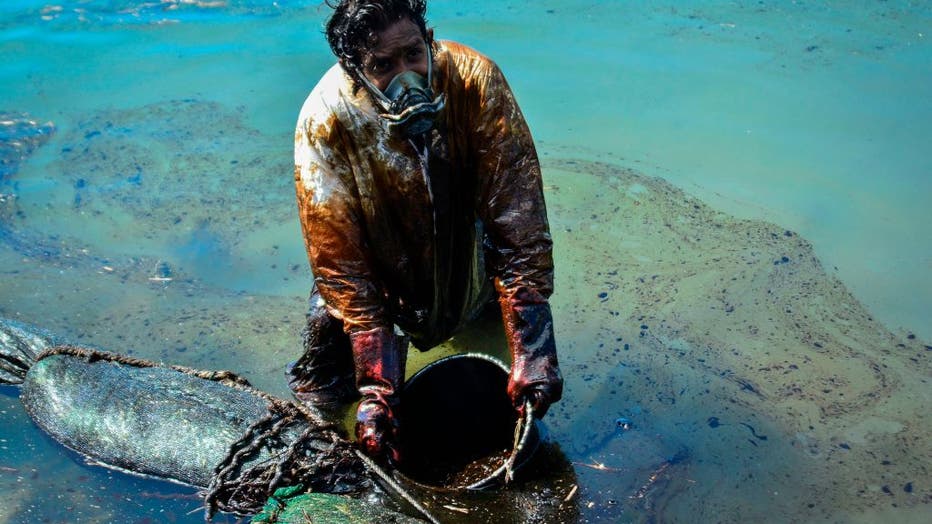 FILE - A man scoops leaked oil from the vessel MV Wakashio, that ran aground near Blue Bay Marine Park off the coast of south-east Mauritius on August 8, 2020. (JEAN AURELIO PRUDENCE/L'Express Maurice/AFP via Getty Images)

At their first news conference since the ship ran aground two weeks ago, the officials said they have sent experts to Mauritius to join in the cleanup effort. They are trying to do so in an environmentally safe way, without using emulsifiers and other environmentally harmful chemicals, said Kiyoaki Nagashiki, president of the shipowner Nagashiki Shipping.

“First of all, we are doing the utmost to prevent further oil spill and to remove it from the sea,” said Akihiko Ono, vice president of Mitsui O.S.K. Lines. “We are aware of a potential major impact on the tourism in the area and we take it very seriously."

The officials said the Wakashio left China on July 14 and was on its way to Brazil. The ship was about 1 mile off the southeast coast of Mauritius when it went aground, even though it was supposed to be 10 to 20 miles (16 to 32 kilometers) away from the island, Mitsui executive Masanori Kato said. Mitsui is investigating why the ship went off course.

The officials said the companies were continuing to remove fuel from the ship using a vessel small enough to safely operate in the shallow waters. They said the operation is time-consuming because of rough waves. The shipowner and operator are working with a salvage ship to lift the tanker while trying to prevent any further oil leaks.

The ship’s engine room and ballast tank were damaged and had water seeping inside, but its 20 crew members have been safely evacuated, officials said.