The fire erupted around 5:25 a.m. at 2255 at East Lugonia Ave. Those who live in the area reported hearing a loud noise on social media.

Reports from witnesses on the scene said that roughly 100 workers were inside the building when the fire ignited but everyone was safe and accounted for. No injuries were reported.

"It's a major structure fire at a warehouse, there are some Amazon trucks on the outside of it, it's been reported that it's a supplier to Amazon," said Redlands City Manager Charles M. Duggan Jr. 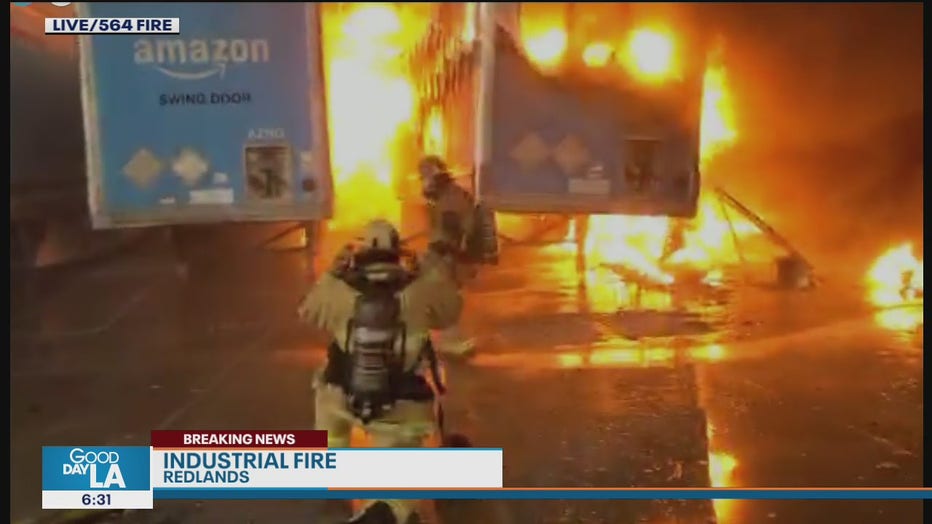 "It's definitely not protest-related, something happened on the inside of the building that ignited the fire," Duggan added.

According to an Amazon spokesperson, this warehouse is operated by Kuehne and Nagel – a third party operator that helps Amazon ship extra-large items to customers.

"No nearby Amazon sites have been impacted," the spokesperson said. "Customer orders will be fulfilled from other locations; we expect minimal customer impact."

The warehouse complex has a square footage of about 1.1. million, which is roughly the size of 21 football fields.

"The smoke is going to be covering the town for hours," said Duggan.

Caltrans had shut down the eastbound lanes of the 10 Freeway at Mountain View Avenue and the westbound lanes at California Street. Both directions have since reopened.