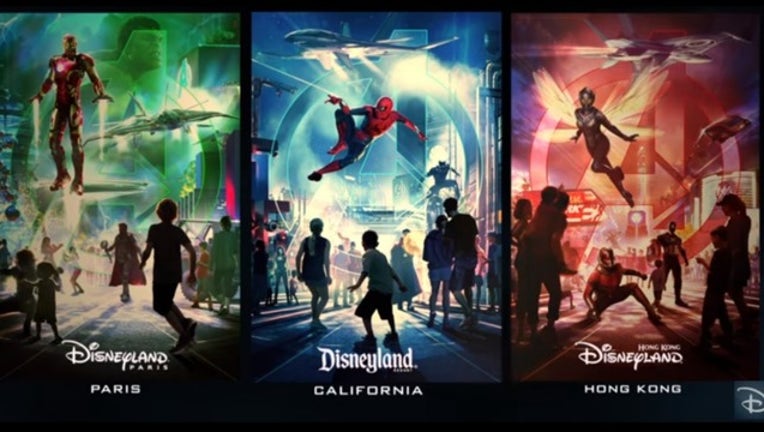 ANAHEIM, Calif. (FOX 11/ CNS) - Spider-Man and the Avengers will be making a splash at Disneyland and other Disney parks around the world in coming years, and Disney gave fans some hints this week of the attractions to come.

An exhibit featuring Spider-Man and the Avengers will be coming to Disney California Adventure Park in Anaheim, alongside the wildly popular Guardians of the Galaxy - Mission: BREAKOUT! ride.

"With the incredible popularity of Iron Man Experience at Hong Kong Disneyland and Guardians of the Galaxy - Mission: BREAKOUT! at Disneyland Resort, we know our guests love experiencing epic action and adventure alongside the Avengers and their heroic friends,'' said Bob Chapek, chairman of Disney Parks, Experiences and Consumer Products. ``We are excited to take the next step by immersing our guests in this ever-expanding universe -- and this is only the beginning.''

The super-hero attraction is expected to replace the ``bug's land'' area inspired by the 1998 Disney/Pixar film ``A Bug's Life.''

In Paris, a new attraction will allow guests to team up with Iron Man and other Avengers on a ``hyper-kinetic adventure in 2020,'' according to Disney.

The Disney Hotel New York in Paris ``will be reimagined to become ... the first Disney hotel to showcase the inspiring world of the Avengers, Spider- Man and more,'' according to Disney.

In June, Disneyland Paris will begin presenting ``Marvel Summer of Super Heroes,'' which is a new, live-action production with special effects.

Hong Kong Disneyland, meanwhile, will also create an area featuring the Marvel Comics characters, including an attraction allowing guests to ``team up with Ant-Man and the Wasp to fight Arnim Zola and his army of Hydra swarm bots.''