Many Mansfield ISD students are now better equipped for the beginning of the school year, even though it will start virtually.

MANSFIELD, Texas - Many Mansfield ISD students are now better equipped for the beginning of the school year, even though it will start virtually.

The district hosted its annual back-to-school bash Saturday morning, but it was scaled back to a drive-thru event this year.

And some parents said they are worried about sending their children back after the district confirmed an employee already tested positive for COVID-19.

Parents and students had to stay inside their cars when picking up the school supplies.

In addition to a backpack, students each received a face mask and hand sanitizer.

The superintendent said the district is doing everything it can to keep people safe.

At the event, staff and volunteers were upbeat.

In previous years, students and parents would go inside to get their supplies and take part in activities, but due to the pandemic, this year's event was turned into a drive-thru. 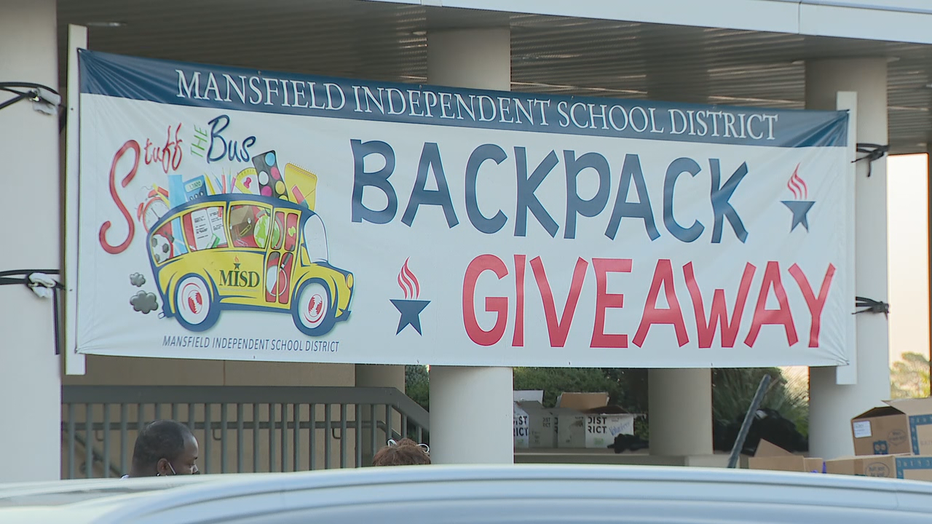 “We support them and we're just so excited to be in back-to-school gear,” Mansfield ISD parent Dalyn Bridges said.

The event comes a day after Mansfield ISD confirmed that a staff member at Donna Shepard Leadership Academy is under quarantine after testing positive for COVID-19.

The superintendent said the district is doing everything it can to make sure students and staff feel safe.

“If there's any concerns, it's about wanting to make sure everyone is okay. So if there's something that's going to keep me up at night, it's that,” superintendent Kimberley Cantu.

Many parents at Saturday's event said they feel safe sending their kids back to school.

“The support system has been great. Their communication has been wonderful and we really can't wait to get back into the classroom,” Bridges said.

But some parents aren't so sure.

Jessica Whitten has two kids in the district.

She said the fact that one Mansfield ISD staffer has already tested positive for COVID-19, before classes have even begun, means her kids will be learning online.

“You're talking about little kids who spread things so quickly and so easily. They're going to be dealing with this and the flu,” Whitten said. “At this point, virtual. We're just going to stay home. We're going to have some consistency not worrying about what is being done what isn't being done. Hopefully things will be better in January. We wanted to go back then. But now it's starting to seem a little less feasible to us.”

District officials said another staff member at a separate school has been tested for COVID-19. They're awaiting those results.

No word on when the results could be back.