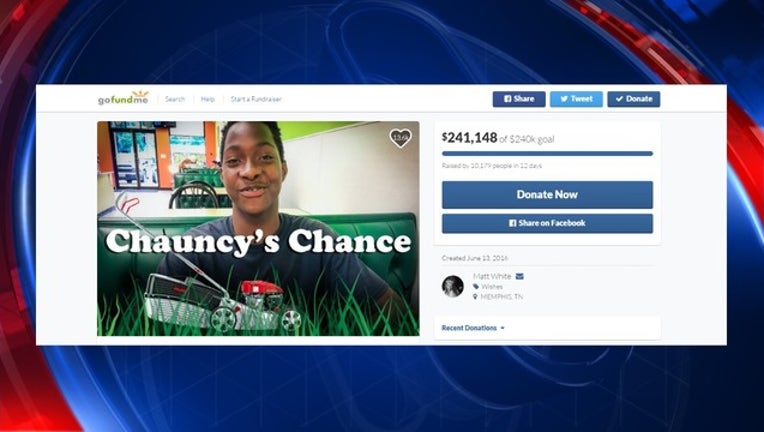 MEMPHIS, Tn. - A Memphis man's Facebook post about an inspiring teenage boy has set the Internet on fire, resulting in a GoFundMe campaign that has raised over $200,000.

Matt White posted a status on Facebook on June 10 describing an encounter he had with a 16-year-old boy named Chauncy Jones at a local Kroger.

Jones had taken the bus to the store in search of food donations from shoppers to help feed he and his mother. White was touched by Jones and took him on a shopping spree at the store, stocking him up with food and toiletries.

"All the while we talked and he told me how he makes straight A's in school and is trying to get a job to help his mom pay rent. This kid was amazing," White wrote. "Chauncy kept calling himself poor, but he told me that one day he was gonna be wealthy and own his own businesses so that he could help other people in his neighborhood and buy them groceries like me."

White then drove Chauncy home and saw that he had been telling the truth, and that he and his mother were living in a desolate home with an empty fridge, sleeping bags for beds and a few lamps for light.

"As we unpacked the food into their kitchen, you could see the hope coming back into Chauncy's eyes. He knew he wasn't going to be hungry. He looked like a kid again," wrote White. "As I was leaving I gave him a hug and told him how much God loved him and that he was going to grow up to be an incredible man. I'll never forget that hug. It meant more to me than any possession I have."

White's Facebook post soon went viral, prompting him to start a GoFundMe campaign to assist Jones and his mother. The fundraiser started with a goal of just $250, but has now raised over $200,000 to give the family a fresh start.

White wrote that he was shocked by the response, saying, "I keep raising the goal because people just keep giving and giving to them, it's unreal. It would be a dream come true if we could raise enough money to get them their own place. God teaches us to dream and pray big. So I am. Thank you again."

Over 10,000 people have donated to the campaign in just 12 days, with many commenting to wish Jones and his mother good luck and sending messages of love and support.

"We just want to let everyone know how thankful we are of all the love and support," said White's most recent update.