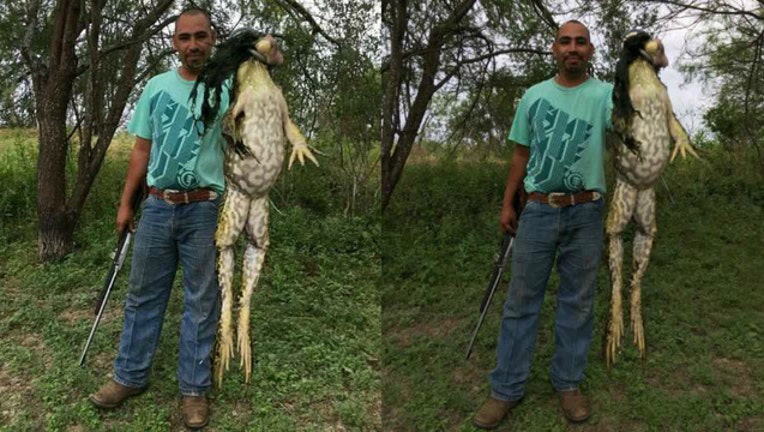 FOX 32 NEWS - A man in Texas caught a monster-sized frog, and the photos are going viral online.

According to the South Texas Hunting Association’s Facebook page, Markcuz Rangel is the man who captured the giant bull frog last Wednesday. The frog was caught in a fishing pond in Batesville in south Texas.

A spokesman for the Texas Parks & Wildlife Department told the Houston Chronicle that the photo is real and not photoshopped. However, the spokesman said the picture is a little misleading.

"It's not as bigly as it appears," spokesman Steve Lightfoot said. "[It's an] optical illusion created by extending frog toward the camera – similar to what you see with fishermen holding up fish to make them appear larger. Still a big bullfrog, though."

This is how the South Texas Hunting Association captioned the photo on Facebook: "Markcuz Rangel - Wanted to share a monster bull frog we got yesterday afternoon at one of our fishing ponds in South texas ranch located in Batesville tx 13lb monster frog!!!"