Scott Miller says he was towed for failing to register his car, but says there were no signs requiring visitor registration.

DALLAS - FOX4 reported in December about a new practice that is leaving apartment residents and their guests feeling targeted by tow truck companies.

In the latest example, a Denton County justice of the peace ruled a tow was illegal. But now nearly three months after the tow, the vehicle owner says he is still waiting for the tow truck company to pay up.

Since FOX4’S first investigation ran, a lot of people have contacted the station and feel like registration websites are allowing tow truck companies to illegally take their cars in the middle of the night.

Scott Miller says he was towed for failing to register his car, but says there were no signs requiring visitor registration.

“I am forced to pay when they take my car regardless of their right to take my car,” Miller said.

His car was towed in the middle of the night on December 6. A month later, a justice of the peace determined that the tow was illegal. But six weeks after that ruling, Miller says he is still out the money it cost him to get his car back.

“They can inflict an unlimited financial impact on me, while there is nothing I can do other than drag them into court, wasting a little of their time over and over again,” Miller said.

Miller has photos he took the morning his car was towed from the visitor parking area at Overlook Ranch apartments in Far North Dallas. There were no signs stating that visitors needed to register their cars.

The friend he was visiting showed him a letter she received days earlier that the complex hired Innovative Parking Management for parking enforcement. The letter says "visitors must use designated visitor parking -- no permit required."

Miller says the justice of the peace asked the owner of Innovative Parking Management about that letter during the hearing.

“He held it up and said, was this given out? He said yes, he shook his head and that was it,” Miller said. 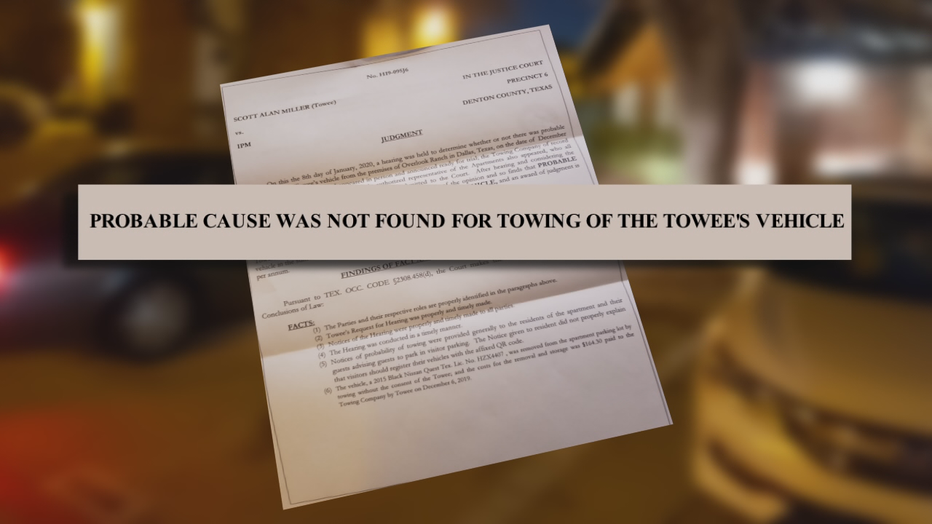 In his ruling, the judge said innovative parking management violated "general requirements for sign..." and ordered IPM to pay Miller for the cost of the tow and court fees.

The owner of IPM spoke with FOX4 over the phone after declining an on camera interview.

He told me he disagreed with the judge's ruling, but he said a check should have already been issued to Miller because they "resolve those quickly." His office manager was out Friday, so he could not confirm if a check had been sent.

As for Overlook Ranch apartment complex, on Wednesday a woman at the leasing office told FOX4 to call the corporate office. Late Friday FOX4 received a call back from a woman from the corporate office who said she would work on getting answers to questions.

Miller worries about others who don't have the time or resources to challenge an illegal tow.

“It took me, with decent amount of resources online, probably five hours of research to figure out where and how to file, let alone running to the court and actually dealing with it,” Miller said.

Innovative Parking Management has a history with the Texas Department of Licensing and Regulation. The state has issued a $1,000 penalty against the company in April 2018. The state found IPM towed a car from a facility that did not have the required signage.