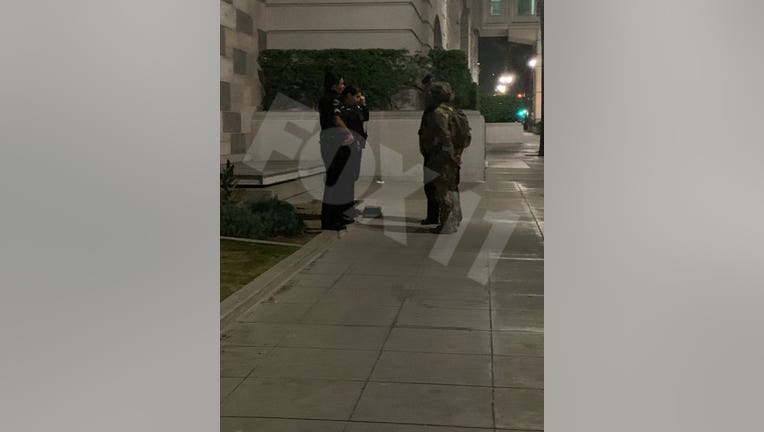 As FOX 11 first reported, authorities told us 31-year-old Gregory Wong was taken into custody on assault weapon charges after being found with a cache of weapons.

The Los Angeles Police Department said Wong was arrested near the intersection of E. 1st Street and N. Main Street in downtown Los Angeles around 1:30 a.m. Tuesday. Several protests over the death of George Floyd have been held in the area.

Sources told FOX 11 investigative reporter Bill Melugin that Wong got dropped off by an Uber right across LAPD headquarters. He then tried to get into formation with a unit of National Guard soldiers who were defending downtown LA from looters.

However, he was quickly spotted out by soldiers based on the gun he had.

Officials told FOX 11 that Wong was carrying an AR-15 rifle rather than an M4 or M16, the typical gear the National Guard carry. Officials also say Wong had other high end tactical gear like night vision goggles and a sidearm.

National Guard soldiers then reported him to LAPD.

Former reservist Jeremy Ma knows Wong through the airsoft community and told us Wong would have never been able to blend in.

“No one I know in the military would do anything so stupid, he kitted himself out as if he was ready to go to Afghanistan and kick in doors. I’m a former national guardsmen, the National Guard deploy with their uniforms, body armor, riot helmets, and one weapon, usually a sidearm or a long arm, he showed up with a sidearm and a long arm, his equipment that carried his body armor was the wrong color, he essentially had a lot of extra equipment,” Ma said.

A suspect in military apparel was taken into custody overnight on assault weapon charges on Tuesday.

Ma tells me Wong had recently been posting on Facebook that he’s available to help defend stores from looters.

“And he was not getting very much response from that and maybe he expressed a bit of frustration,” Ma added.

Sonny Pepito is the owner of TacCity Airsoft in Fullerton...and also knows Wong...who he describes as polite...and mild mannered.
“It’s just so weird he would do something this stupid, it seems childish,” Pepito said.

While in police custody Wong claimed he was meeting one of his friends who was in the National Guard and told police his goal was to defend a jewelry store in downtown.

But police say he never left formation. LAPD says they don’t believe he intended to hurt anyone.

Wong was booked on felony charges for the manufacturing and distribution of assault weapons.