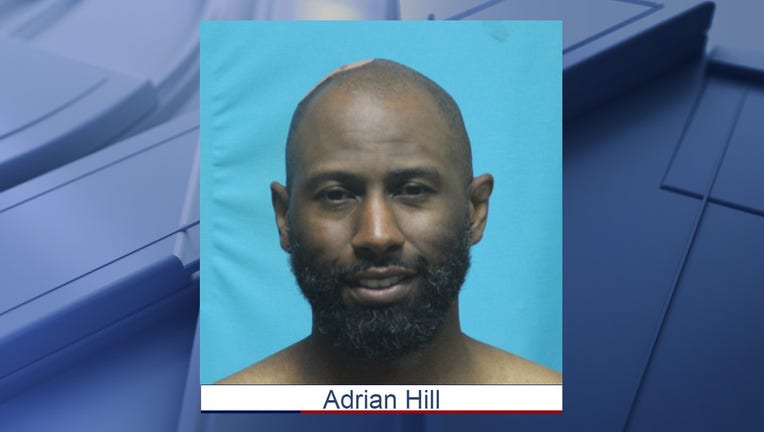 SOUTHLAKE, Texas - Southlake police arrested a 44-year-old man accused of opening fire at a home and vehicle after tracking down an SUV he thought fled a hit-and-run crash Saturday night.

This incident happened just before 9 p.m., when officers were called to the 200 block of Stockton Drive about a hit-and-run.

A female told police her family’s vehicle was struck by a dark-colored SUV while stopped at a traffic light at the intersection of W. Kirkwood Blvd. and the service road for SH 114.

The SUV then fled the scene, and the victim’s husband, identified as Adrian Hill, followed the SUV, before losing sight of it when it turned onto Stockton Dr.

Police said Hill then found a black SUV parked in the driveway of a home in the 200 block of Stockton Dr.

Believing this was the vehicle involved in the hit-and-run, Hill then parked in the driveway and got out of his vehicle with a gun, according to police.

A man and woman got out of the black SUV, and after seeing Hill approaching them with a gun, the man took out a pocketknife.

Hill and the man then got into a physical altercation, and Hill then fired shots at the man’s vehicle and home.

They both had non-life threatening injuries from the fight, but no one was injured by the gunfire.

Police determined that then man and woman in the black SUV were not involved in the hit-and-run, and were not in the area at the time of the crash.

Hill was arrested and charged with deadly conduct.

Southlake police said the dark-colored SUV involved in the hit-and-run has not yet been found.