A Dallas County man has filed an excessive force civil lawsuit against a Dallas Police Department officer who he claims punched him 11 times and kneed him in the face twice during an arrest back in 2018.

DALLAS - A Dallas County man has filed an excessive force civil lawsuit against a Dallas Police Department officer who he claims punched him 11 times and kneed him in the face twice during an arrest back in 2018.

The lawsuit was filed on behalf of Javier Saenz against officer Elvin Calix-Barahona.

According to court documents, this case goes back to an arrest on June 23, 2018, when Calix-Barahona and his partner responded to a call about an intoxicated person, Saenz.

Dallas police were called because Saenz was reportedly passed out on the side of the roadway.

The body camera video obtained by FOX4 showed him and another man sitting upright as firefighter paramedics evaluate them.

A police affidavit said officers determined Saenz could be hit by a car or become a victim of a crime if he was not arrested.

When Saenz was told to put his hands behind his back, he tried to stand up. That’s when he was reportedly thrown to the ground and restrained. 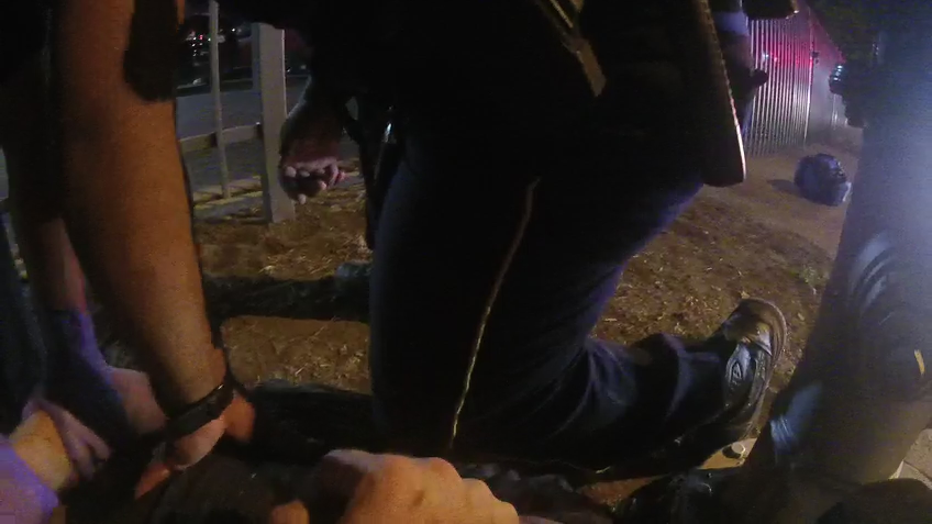 While being restrained, Saenz was initially “passively resisting” by not giving the officers his hands, according to the lawsuit, and that’s when Calix-Barahona reportedly started punching Saenz.

After punching Saenz in the face 11 times, the lawsuit claims Calix-Barahona said, “Don’t **** with me man.”

While Saenz was “stationary” on the ground and “clearly not resisting or threatening anyone,” according to the lawsuit, Calix-Barahona is then accused of kneeing him the face twice.

After the second time, Calix-Barahona’s partner reportedly told him, “OK stop, we got him.”

The lawsuit also alleges that after Saenz was handcuffed and “clearly restrained and not resisting,” Calix-Barahona kneeled on top of him for almost six minutes.

In the police body cam video, Saenz can be heard saying, "I can't breathe," as Calix-Barahona used his knee to restrain him while trying to apply handcuffs.

Police and paramedics later moved Saenz to a stretcher and took him to the hospital.

An officer is heard blaming Saenz for what happened.

“You shouldn't have made us do that man,” an officer is heard saying on the body cam video.

His injuries from the scuffle were visible in his mug shot.

According to the lawsuit, Calix-Barahona wrote a narrative for the affidavit that did not included kneeing Saenz in the face, and alleges he did so because he was “aware that kneeing Mr. Saenz in the face was unnecessary,” “illegal,” and “an excessive use of force.”

The lawsuit also accuses Calix-Barahona of lying on the affidavit by stating he punched Saenz because Saenz “used his teeth and clinched his jaws and would not let go of [Officer] Rodriguez.”

But the lawsuit alleges that is “simply untrue,” and that “the body camera video clearly shows, not one of these punches occurred” while Saenz was biting the other officer.

Officer Calix-Barahona said in the affidavit that Saenz attempted to bite him in the groin.

The affidavit stated that Saenz also bit another officer on the hand, which prompted Calix-Barahona to use “close handed strikes” to force Saenz to release his jaw.

But his attorneys believe the bite, if it happened, came after the punches began.

“You hear officer Rodriguez in pain because he reaches toward his mouth while he is being punched. We think it is incidental to the struggle that he may have been bit,” attorney Scott Palmer said.

Saenz was initially arrested for drug possession and assault on a public servant, but the drug charge was dismissed and there is no record that the assault case was pursued.

“Our client wasn't charged with assault on a public servant. Our client was beat. He was the victim here,” attorney James Roberts said.

Dallas City Council is set to discuss this lawsuit during its closed session Wednesday.