The losses will likely continue into May.

LOS ANGELES - Nearly 33.5 million Americans have lost their jobs and applied for unemployment benefits in the past 7 weeks — a stunning record high that reflects the near-complete shutdown of the U.S. economy.

For those who have lost jobs, it's a frightening time. Bills need to be paid. Do they qualify for unemployment benefits? How fast will the money arrive?

Here are some questions and answers:

HOW CAN I GET UNEMPLOYMENT BENEFITS?

Workers who have lost their jobs or income through no fault of their own should immediately file a claim for unemployment aid through their state labor departments. The benefit program is administered by state agencies. Most states are encouraging people to request benefits online or, if necessary, over the phone.

I'VE HEARD THE SYSTEM IS OVERWHELMED BY REQUESTS. 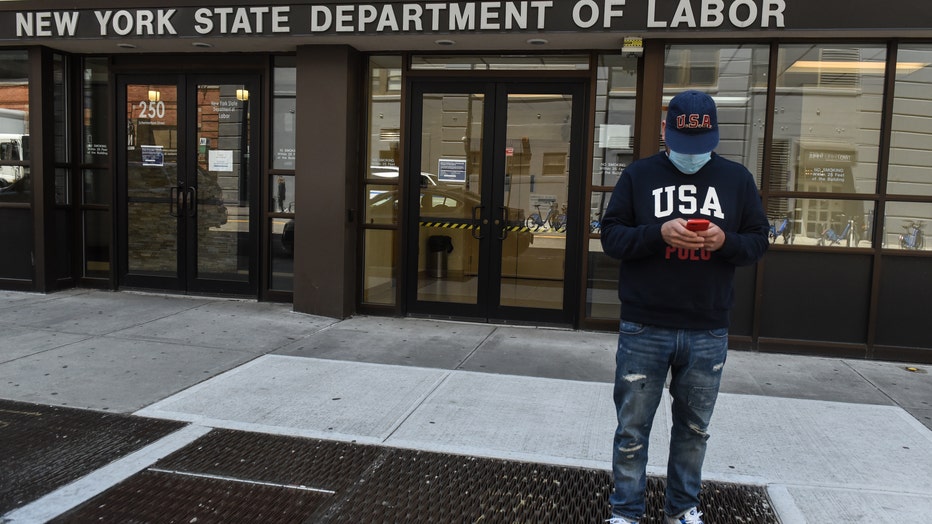 FILE - Luis Mora stands in front of the closed offices of the New York State Department of Labor on May 7, 2020 in the Brooklyn borough in New York City. (Photo by Stephanie Keith/Getty Images)

Things have improved some as states have brought on extra workers and expanded hours to accept calls. The pressure has also eased as more people make their way through the system. However, there may still be a wait.

All the same, people who have lost jobs or whose income has been hurt by coronavirus should keep trying. It does take time to process a claim, potentially several weeks, but benefit payments are retroactive: Eligible workers will receive benefits from the date they lost their jobs, regardless of when they file.

HOW CAN I MAKE THE PROCESS OPERATE MORE SMOOTHLY?

Have all your information ready. This includes contact information for all your employers from the past 18 months, your Social Security number and documentation of your income, such as from tax forms or pay stubs.

HOW LARGE ARE THE UNEMPLOYMENT AID CHECKS?

They vary sharply by state. Mississippi provides the lowest amount, $235 a week. Massachusetts pays $823 a week, the highest.

I HEARD THE FEDERAL GOVERNMENT IS PROVIDING AN EXTRA $600 A WEEK.

Yes. After problems with state computer systems had slowed the distribution of federal benefits for many laid-off workers, all 50 states are now paying the $600 extra weekly benefit that the federal government included in a relief package enacted in late March.

I'M SELF-EMPLOYED. WILL I QUALIFY?

Yes, that is one of the changes made by the $2.2 trillion economic rescue package signed into law by President Donald Trump. If you are self-employed, a contractor or a gig worker, you are now eligible to claim unemployment benefits.

I WASN’T LAID OFF, BUT MY EMPLOYER CUT MY HOURS. WILL I QUALIFY FOR BENEFITS?

Yes, you should apply. State rules differ, and it depends how large your income loss is. But in some states, workers whose hours have been sharply cut may be able to claim benefits that would make up for at least some of the lost income. Generally, if your lost pay exceeds what you would receive in unemployment benefits, you may be eligible for aid.

I HAD TO LEAVE WORK BECAUSE OF THE CORONAVIRUS BUT WASN'T LAID OFF. WHAT ABOUT ME?

You can potentially receive benefits, too. The U.S. Labor Department said states can make unemployment benefits available to people who are quarantined, who left work because of risk of exposure or to care for a family member.

That said, someone who receives paid sick leave or paid family leave is often still receiving full pay. So according to the Labor Department, that person is not “unemployed” and does not qualify for unemployment benefits.

WHAT ABOUT THOSE $1,200 CHECKS THE GOVERNMENT IS SENDING OUT? WHEN WILL I GET MINE?

The federal rescue package provides a one-time payment of $1,200 for all Americans earning less than $75,000 a year. This money is totally separate from unemployment benefits — and for the jobless, will be in addition to unemployment aid. It will likely be a critical lifeline for many Americans.

The payments begin to phase out at above $75,000 for individuals and $150,000 for couples filing jointly and drop to zero for individuals above $99,000 and couples earning $198,000. For heads of household with one child, the benefit starts to decline at $112,500 and falls to zero at $146,500. Even those who just receive Social Security or other government benefit programs can receive a check.

HOW LONG WILL UNEMPLOYMENT BENEFITS LAST?

The duration varies by state. But the federal relief package adds 13 weeks of coverage for people who have exhausted their existing jobless benefits. Under the emergency legislation, people who exhaust both regular and extended benefits will become eligible for Pandemic Unemployment Assistance. People can receive a maximum of 39 weeks of benefits this year from all three sources combined.

WHAT ABOUT GOVERNMENT AID FOR COMPANIES? CAN THAT HELP ME?

It might. Small businesses are eligible for loans that will be forgiven if they keep or rehire people they have laid off. About $535 billion of loans have been approved as of Thursday, according to the Treasury Department.