Business owners in the Preston Oaks Shopping Center are coming to terms with the fact that there’s little, if anything, left to salvage.

DALLAS - The EF-3 tornado from Sunday damaged and uprooted longtime businesses that served the community for decades in the North Dallas area.

Business owners in the Preston Oaks Shopping Center are coming to terms with the fact that there’s little, if anything, left to salvage.

My Family’s Pizza has deep roots in the Preston Oaks Shopping Center. They opened in 1962. But the once-thriving neighborhood institution now resembles a bombed-out shell of insulation and pizza boxes.

Owner Frank Nuccio says the pizza place is typically open on Christmas, Easter, Thanksgiving and New Year’s. Because of the damage, they were closed for the first time ever. 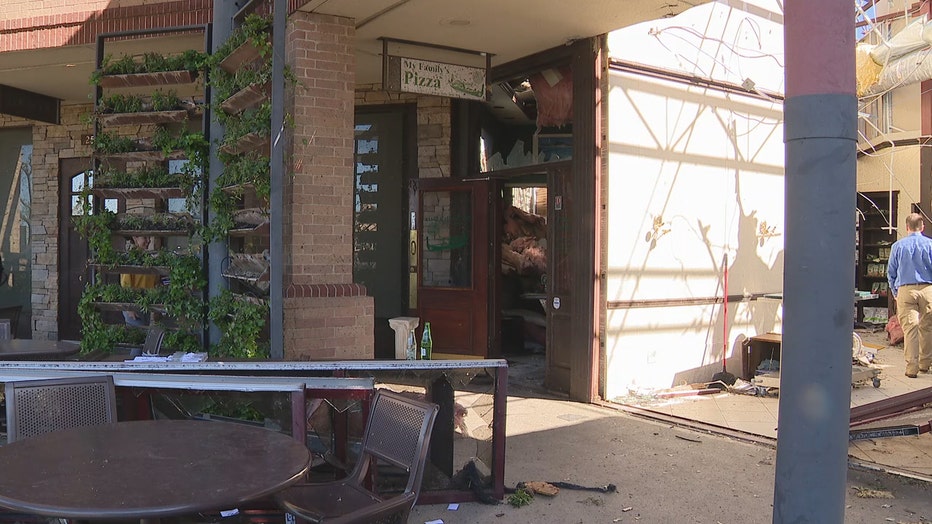 “I grew up five houses down on Tulip Lane,” the owner said. “And when I was 5 or 6 years old, a tornado was going down Orchid Lane the next street over.

Nuccio has even deeper roots in the community. His old house is a stone’s throw from the back door.

“I’ve never been scared of tornadoes,” he said. “What are the odds it’s going to happen to me again in my lifetime. Hit something that’s connected to me.”

The odds may not have been good, but fate has a way of intervening.

Nuccio is now concerned for his dozen employees. Two of them have been with him for about 40 years.

“I’m going to help them as much as I can with insurance money, but they are probably going to have to get something different until I reopen,” he said.

Next door, veterinarian Dr. Sara Thomas is wheeling out what little can be saved from the 50-year-old clinic.

“Who knows what happens. We hope to be able to rebuild,” Thomas said. “But along the way, you lose your business. People have got to go to the vet. And if you are too far away for them to drive to, they are going to reestablish in a new practice. It’s like starting over again.”

Despite the challenges, Nuccio is staying optimistic and insistent they’ll be back at their current location or hopefully close by. He estimates the process could take three to six months.