Long lines were a common theme for voters in the Democratic primary on Tuesday in North Texas’ two most populous counties – Dallas and Tarrant.

DALLAS - Long lines were a common theme for voters in the Democratic primary on Tuesday in North Texas’ two most populous counties – Dallas and Tarrant.

A lack of machines for Democratic voters meant waits at some locations of more than an hour, for various reasons.

Tarrant County Elections officials allocated about 600 more machines countywide to Republicans despite the fact that Democrats had the more high-profile races. The allocations were made using historical voting data.

Tarrant County officials pointed the finger at the county parties in a midday tweet.

“Both parties were offered to share equipment to avoid this situation, they did not agree to and chose to go with the numbers of machines deployed. We wish they had taken our advice,” the election’s office said.

The county had five teams of people moving around the county to deal with those types of complaints and others as they surface. There were no complaints about the effectiveness or utility of the machines from Tarrant County voters. 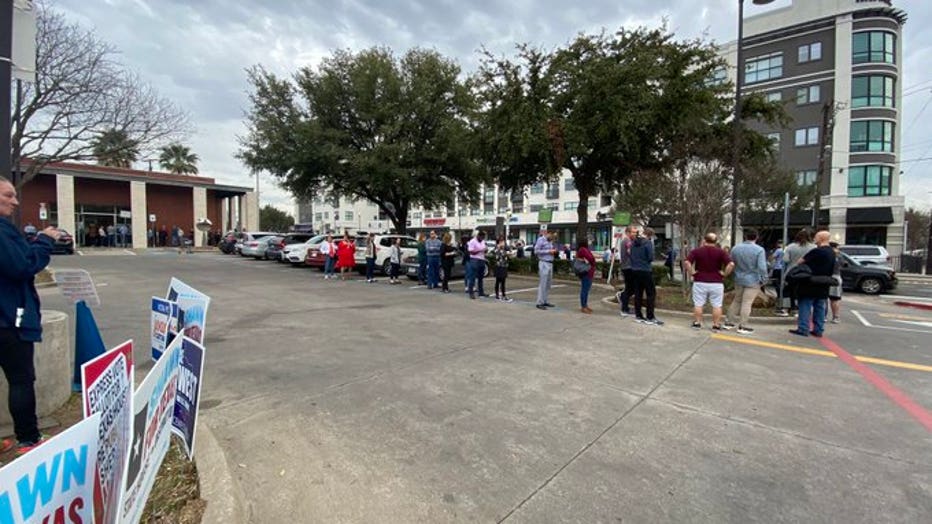 A line outside of Oak Lawn Library on Super Tuesday evening. Voters said they’ve been waiting more than an hour to cast a ballot.

Dallas County also said there were long lines as officials rolled out new voting centers for the first time in major election. That allows voters to cast a ballot at any polling location in the county.

People were still waiting in a line out the door at the Oak Lawn Library more than an hour after the polls had closed at 7 p.m. Tuesday. Some voters had to wait as long as two hours to cast a ballot. One woman had a lawn chair so she could sit down while she waited in line.

Voters said the issues were a lack of machines at the location.

"When I arrived about 4 o’ clock the line was over by the railings and I'd say there was maybe about a hundred 150 people and it took us about two hours,” said Kathleen Petroskey.

"Due to the high volume we are experiencing because of energized voters, some polling locations have longer than usual wait times," Dallas County Elections Administrator Toni Pippins-Poole said in a statement. "Some locations are experiencing technical or logistical issues but our county elections staff is assisting election officials and dispersing technical assistance to locations when necessary. There are no system-wide issues with the elections equipment."

It was also the first big election in which new machines were used in Tarrant, Collin and Dallas counties. They still rely on touchscreen technology but also give voters a printout of their selections. Voters could check their ballots before inserting the paper into a scanner.

Voters head to the polls in North Texas

Some people will see a hybrid voting system used for the first time for the Texas primary election.