LAKEWOOD, Calif. - It’s a birthday he might never forget.

Sam Sachs' senior living home in Lakewood was planning a 105th birthday celebration for him, but due to the coronavirus the party was cancelled.

But Sachs, a World War II vet, got something even bigger… a parade!

The Sultans Car Club of Long Beach surprised him with a special vintage car parade outside his senior living home.

“We didn’t do cards, but we were able to deliver CARS for his birthday! He’s a WW2 vet and it is his 105th birthday,” Brandon Riddle with Sultans Car Club told FOX 11.

On Facebook the car club stated that this wasn’t there only event of the day. Prior to surprising Sachs, the club threw a parade in Fountain Valley for a 5-year-olds birthday. 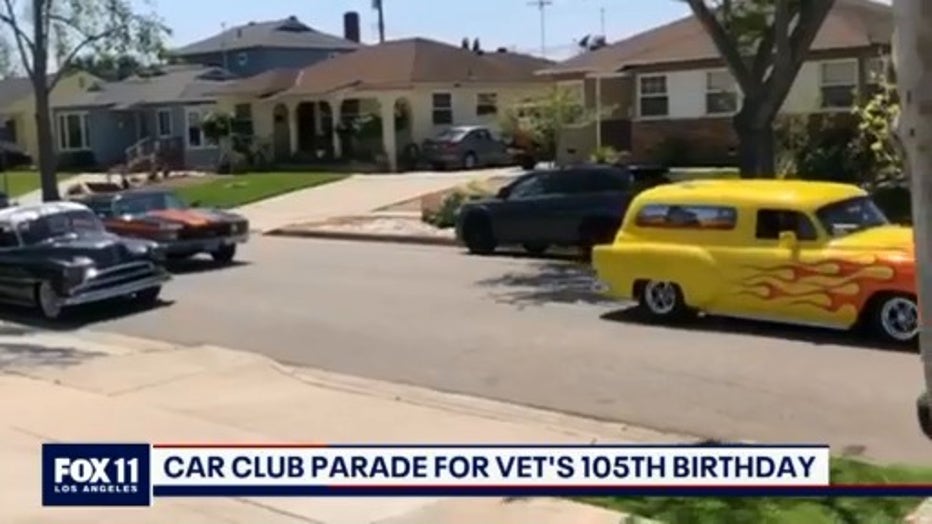 Sachs joined the army at the age of 17 and was part of the Normandy Invasion.

In a video posted on YouTube -- titled Sam Sachs 105 BDAY Wish -- in which the centenarian is dressed in a military uniform, he noted that a birthday party was in the works "but the virus took charge.''

Sachs has received over 60 cards from people in California, Nevada, Oregon New York, South Carolina and Florida as of Friday afternoon, according to Ivonne Meader who owns the senior living home where Sachs lives.