MOORE, Okla. - A pet mini-pig that went viral in his hometown after an escape now finds itself at the center of controversy.

When Larry the pig got out of his yard recently and was reported for blocking a road, police officers in Moore, Oklahoma, helped wrangle him, then shared the video on social media. It got thousands of views and was "shared internationally," his owner Steffany Jones said.

But when Jones went to the animal control facility to pick up Larry, she said was told she had two weeks to get rid of him. At 22 inches tall and 144 pounds, Larry exceeds the town’s maximum size allowed for pet pigs. In Moore, pigs in the city can’t be larger than 20 inches tall and 75 pounds.

Jones went before the Moore City Council on Jan. 3 and pleaded with members to let her keep Larry at home. She’s also asking the council to change the town’s ordinance on pigs in accordance with guidelines from the American Mini Pig Association.

"I’ve raised him since he was a piglet," Jones told the council. 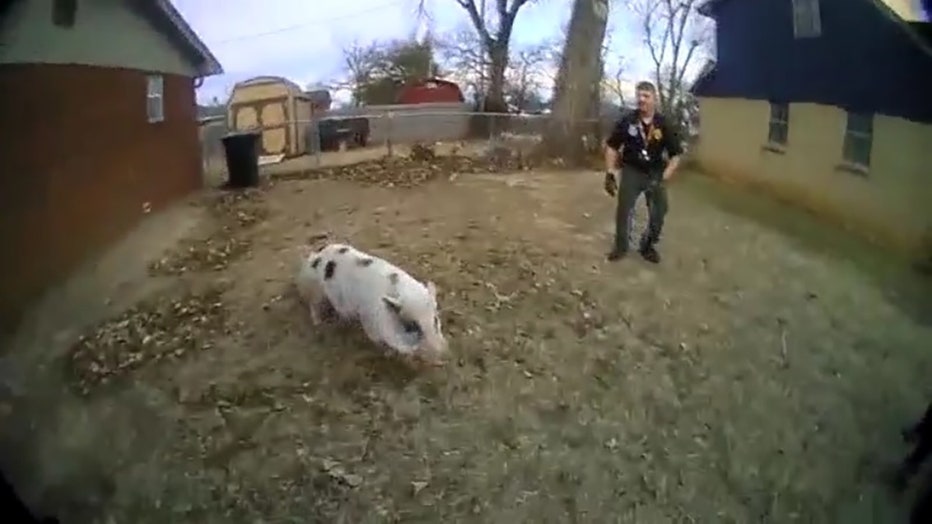 According to Jones’ petition on Change.org, when she got Larry in 2014, the town didn’t have a weight limit on pigs. She also says she has kept in touch with animal control in the eight years since she adopted him.

"Larry is neutered, vaccinated, and micro-chipped," the petition says. "He has his own fenced in yard ... insulated house with a heater and solar powered air conditioner, blankies and a swimming pool for hot sunny days. Larry is very well taken care and loved by his family. He also has a 6-year-old boy at home with Autism that would be devastated if Larry was no longer around."

Jones told the council that mini pigs aren’t what their names suggest: It takes five years for a mini pig to be fully grown, and you can’t know how large they’ll get before they’re done growing.

"Breeders want you to spend thousands of dollars on pigs you think will stay little," Jones said. "That’s not possible."

Mini-pigs are "very smart" and can be trained to "walk on a leash/harness and to sit, stay, come, and retrieve objects," according to VCA Animal Hospitals. There are nearly a dozen breeds of mini pigs in the United States.

Council members told Jones they’re confident they can reach a compromise that will allow Larry to remain with his family.