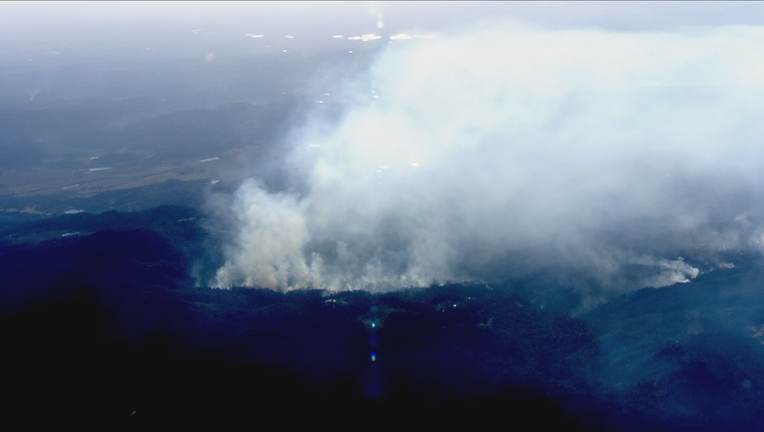 Smoke over the Kincade Fire.

GEYSERVILLE, Calif. - Cal Fire announced on Monday that after 12 days of burning through three counties, the Kincade Fire is 80 percent contained.

To date, the fire, which has touched Sonoma, Napa and Lake counties, had scorched 77,758 acres and destroyed 374 structures, of which 350 were homes.

There have been four firefighter injuries so far, Cal Fire reported, and no civilian deaths or injuries.

The fire was first reported Oct. 23 at 9:27 p.m. northeast of Geyersville on Kincade Road in Sonoma County. Firefighters expect to fully contain the blaze on Nov. 7. SkyFox flew overhead over the weekend showing aerials of burned land and scorched trees.

The good news came as President Donald Trump on Sunday threatened to cut U.S. funding to California for aid during wildfires that have burned across the state during dry winds this fall.

Trump tweeted  that California Gov. Gavin Newsom has done a "terrible job of forest management." He tweeted that when fires rage, the governor comes to the federal government for help. "No more," the president tweeted.

Newsom didn't immediately comment. However, the state controls just a small percentage of forest land. The federal government manages most of it.

Last year Trump made a similar threat as wildfires devastated Malibu and Paradise, California - accusing the state of "gross mismanagement" of forests.

At the time Newsom defended California's wildfire prevention efforts while criticizing the federal government for not doing enough to help protect the state.