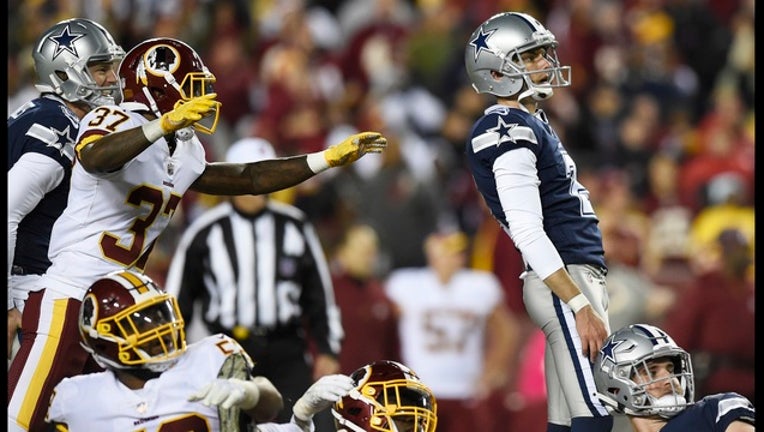 Kicker Brett Maher #2 of the Dallas Cowboys reacts after missing a field goal at the end of the fourth quarter against the Washington Redskins at FedExField on October 21, 2018 in Landover, Maryland. (Photo by Patrick McDermott/Getty Images)

LANDOVER, Md. (AP) - No one on the winning Washington Redskins or the losing Dallas Cowboys seemed entirely sure about the rule that led to a penalty for "snap infraction." That flag turned a 47-yard field-goal try into a 52-yarder that slammed off the left upright as time expired.

"I don't know what happened there," said Redskins coach Jay Gruden, after his club avoided overtime and edged the Cowboys 20-17 Sunday to remain alone atop the NFC East when Dallas' Brett Maher missed the potential tying kick.

The call, in a nutshell: A Redskins lineman moved early, but the flag went against Cowboys long snapper L.P. Ladoceur, because he moved the football illegally.

That last part was news to Ladoceur, the longest-tenured member of Dallas' roster.

"Exact same thing I've been doing for 14 years," he said.

Asked how often he's seen that call in the NFL, Cowboys coach Jason Garrett said: "I don't know. Once? Twice? Not very often."

"I've never seen anything like that before," he said, "but it's my job to kick it, wherever it was."

His miss foiled a spirited comeback attempt after Redskins linebacker Ryan Kerrigan's strip-sack of Cowboys quarterback Dak Prescott was recovered for a touchdown by Preston Smith with just under five minutes left in the fourth quarter.

"Scoop and score," said Smith. "Yeah, that was one of the easiest touchdowns I ever had."

That made it 20-10 and was Washington's fourth sack of Prescott, who used smelling salts and was checked for a concussion in the first quarter after taking a shoulder to his helmet at the end of a run.

The QB didn't miss a play, returning for the Cowboys' next possession.

Prescott lost two fumbles in the game, including one on an earlier fourth-and-1 keeper.

The Redskins (4-2) won consecutive games for the first time this season. The Cowboys dropped to 0-4 on the road, 3-4 overall, as they head into their bye week.

Washington won this one thanks to its staunch defense and 99 yards on 24 carries from Adrian Peterson, who helped mask the latest so-so performance from quarterback Alex Smith and a generally iffy offense that was missing three injured playmakers.

The Redskins twice had to settle for short field goals in the second half despite having first-and-goal opportunities. On each of those possessions, Alex Smith missed an open receiver in the end zone from down close.

Washington's QB finished 14 for 25 for 178 yards, including a 23-yard TD on a swing pass to Kapri Bibbs in the first quarter. But there were some questionable decisions, including running out of bounds on third down with 78 seconds left, stopping the clock before a punt gave the ball back to Dallas.

The Redskins limited Ezekiel Elliott, the NFL's No. 2 rusher entering the week, to 34 yards on 15 carries, the second-lowest total of his pro career.

"He's a great, great player," Gruden said. "It takes all 11 men on defense to get him stopped, and our defensive line played outstanding."

Prescott was 22 for 35 for 273 yards, with one TD pass and one TD run. He connected with rookie receiver Michael Gallup on a 49-yard score a minute before halftime that made the score 7-all, then - after Kerrigan's key play made it 20-10 - scored on a 1-yard quarterback draw to cut Dallas' deficit to three points with 1½ minutes remaining.

The Cowboys got the ball back and drove into Redskins territory thanks, in part, to three consecutive completions from Prescott to Beasley that ate up a total of 33 yards.

But in the final seconds, Dallas seemed content to try to get to OT rather than pushing for a go-ahead TD.

And, well, the field goal did not go according to plan.

"It didn't come down to the kick," Dallas right guard Zack Martin said. "It came down to the first three quarters leading up to that."

Prescott was nonchalant about the being captured by a TV camera using smelling salts, saying, "I do that every game." Redskins LB Mason Foster agreed that it's commonplace in the NFL. "I feel like everybody uses them, just to wake up or whatever. It's almost like a habit."

Redskins: Both Kerrigan (chest) and Preston Smith (ankle) briefly left the game with injuries but returned. ... CB Fabian Moreau hurt his ankle in the last minute of the fourth quarter.